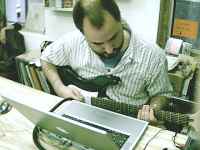 Fringe Festival: This evening, I went down to a grimy, industrial, as yet ungentrified part of North Melbourne to see the most recent Theatre In Decay performance, All Dressed Up And No-One To Blow. It started off with what sounded like a Marilyn Manson cover of Tears For Fears' Shout (or perhaps it was the original, given its ominous edge by the ambience of the subterranean concrete vault the play was held in), which faded out to what sounded like circus music played on a drum machine and wavetable synth by someone who listened to a lot of Sisters Of Mercy. The play itself was not bad (it had gangs of psychotic clowns running around Luna Park, indulging in a spot of the old ultra-violence, with a bit of a Clockwork Orange influence evident), except that the violent, scatological nihilism seemed a bit on the adolescent side (one can imagine some 18-year-old goth kid coming along to this, seeing it and thinking "wow! clowns sodomising each other and setting people on fire! that's sooo dark and fucked up! kick arse!"). Then again, given that it was set in St Kilda (which is now a yuppie playground, and not the seedy underbelly it was some years ago) suggests that it may have been written some years ago.