An absolutely gorgeous 3D-rendered webcomic speculating on what blogs will be like in the distant future. Though in some ways it has that early-90s cyberculture/teledildonics vibe, back when technology was going to bring the singularity and disembodied virtual sex was supposed to be the new LSD or something. Still, for us in the year 2002, living under the threats of Al-Qaeda dirty bombs, home-grown totalitarianism and war without end, and the prospect of a locked-down, censored, end-to-end rights-managed Internet being more a tool of corporate control than personal liberation, it's a nice bit of utopian retrofuturism, a vision of a future from a different timeline. (via rebecca's pocket)

Now why didn't Gary Glitter think of that? On trial for sex with a minor, 'R&B' producer R Kelly has recorded a song making his case. The song, titled Heaven, I Need A Hug, will be released exclusively to a local radio station. With the salacious backstory and stomach-turning title/lyrics, it looks set to end up on numerous least essential recordings lists and post-ironic novelty mix CDs. 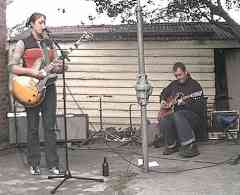 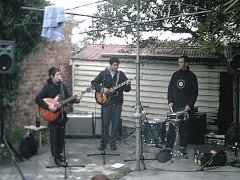 A piece on US synthpop/techno act Fischerspooner, and their eschewal of any pretense of creating the music on stage.

"Once you put that aside and don't worry about these issues of musical integrity -- this illusion that people are manufacturing the music up there, which they're not -- you have all this time and energy and space and freedom to do lots of other things. You could stage a Busby Berkeley musical, because you don't have to worry about playing the guitar."