The Pentagon is developing a sonic weapon based on one of the most fearsome sounds known to humanity: that of a baby crying. The weapon transmits sound along two ultrasonic signals, so that only the immediate target hears it. Other parts of the military-industrial complex are keen to cash in on the technology as well; already a company plans to use it in soft-drink machines, so that the person in front of the machine can hear the sound of a can opening. Wonder how long until they put this in advertising signs.

Robert Stratton went on to read nomenclature at Cambridges Trinity College. There he studied kabbalistic texts written centuries before, when nomenclators were still called baalei shem and automata were called golem, texts that laid the foundation for the science of names: the Sefer Yezirah, Eleazar of Worms' Sodei Razayya, Abulafia's Hayyei ha-Olam ha-Ba.

The Reg dissects Microsoft's DRM "trusted computing" OS plans. It looks pretty nasty; say goodbye to commodity data formats and protocols, and hello to signed "trusted clients" and end-to-end content control, all routed through the one degree of separation that is the One Microsoft Way. And you can bet that this stuff won't work with open-source operating systems. But hey, it's For Your Own Good...

Well, after a bit of tweaking, the HTML of this blog has become somewhat less hideous, and as such it renders OK in Konqueror now. (Amazing how much a missing </FONT> tag can stuff things up. And yes, I know I should get rid of all the FONT tags and do everything with stylesheets, and I'll get around to it one of these days.) I haven't tested it in IE yet (not having VMWare set up on my new Debian system yet), though.

Tonight was the last ever Trivia Night at the Empress Hotel (the host is calling it a day to concentrate on his indie-rock career), and the team I was on were crowned the all-time reigning champions. 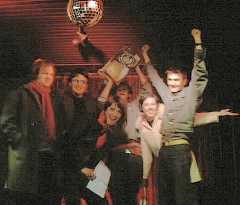 I'm the dodgy-looking geezer in the glasses, btw.