Excellent; FourPlay cover Radiohead's How To Disappear Completely, one of my favourite Radiohead songs. I can't wait to hear what they do with it.

The Daily Adventures of Mixerman, a secret web journal maintained by an anonymous sound engineer working on an album with a major-label-signed band, and showing just how fucked up things are in the recording business. (via rocknerd)

An article from an Irish newspaper on Ashcroft's 'Citizen Corps' informer programme, and other erosions of civil rights.

Effectively, if a repair man arrives to fix your fridge, and happens to notice a copy of Michael Moore's book, Stupid White Men, on your counter, he would be within his remit to call the Hotline and you could, depending on how busy the local FBI field office is, find yourself receiving a visit from the federales.

Being dragged away by the FBI at 3AM for owning an un-American book is somewhat unlikely; what seems more likely is that a large number of minor things (possession of subversive literature, professing atheistic views, associating with members of environmental groups, etc.) will contribute to your suspicion rating. If you regularly make phone calls or send emails to people with high suspicion ratings, that increases your rating as well, all done automatically by data-mining software. Not to mention if your supermarket shopping patterns match the characteristics of terrorists, subversives or un-American types, in various seemingly innocuous ways. If your rating exceeds a certain threshold, additional surveillance may be conducted on you, or you may be barred from flying in commercial airliners (like those Green Party members shortly after September 11 last year). This is the Stasi for the information age; subtle and pervasive. 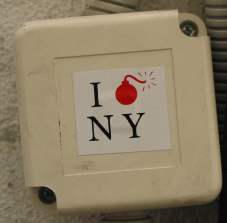 A psychology study has found proof that alcohol makes you more attractive -- at least when someone else is drinking it. In a study of 120 male and female students, researchers found that two pints of beer increased the perceived attractiveness of the opposite sex by about 25%. This is hypothesised to be a result of alcohol stimulating the nucleus accumbens, which is responsible for judging facial attractiveness.

Is DVD region enforcement on the verge of collapse?

Insanely great? Could Apple be developing a mobile phone/PDA based on iPod technology and integrated with MacOS X?