According to a recent A Word A Day a "goth" is "a rude or uncivilized person". So it's synonymous with "mook" then?

(Which other youth subcultures are named after words for disagreeable people? There's punk, for one.) 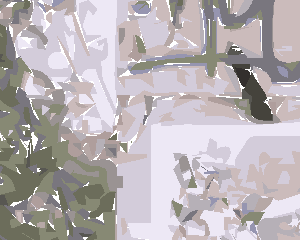 Eleven of my autotraced digital photographs (the ones taken with my old 640x480 toy camera and autotraced to make them look less crap, with interesting results) are currently being exhibited at Good Morning Captain in Johnston St., Collingwood. They're all from around Melbourne (except for one from Apollo Bay), taken between 2001 and 2002, and will be around for the next 2-4 weeks (unless someone buys them first).

Starship Troopers is a penetrating satire of post-9/11 war hysteria as might be imagined by an idealistic New World Order fascist. It's hard to believe it was made pre-9/11; impossible to think it could be made post-9/11.

Poster companies in the US have attracted criticism for sanitising a poster of The Beatles' Abbey Road album cover, removing a cigarette from Paul McCartney's hand. This was done without the permission of either McCartney or Apple Records.

"watcht this bitch!" 21-year-old IRC user overdoses online, taking lots of drugs in front of his webcam, while his friends on IRC cheered him on. Suicide or just stupidity? (via MeFi)