Remember the Simputer, the tiny Indian-designed Linux-based computer that was going to be cheap and rugged enough for remote villages and powerful enough to be useful, and was going to revolutionise life in the developing world? Well, it's now available. The Amida Simputer has some fairly decent specs, and connects to a lot of things. The internal software is based on Linux and X, only with a custom toolkit. The bundled software gives a glimpse of what PCs would have been like had they been invented in India rather than the US, with "Khatha", a financial planning package based on traditional Indian accounting methods and an astrology application ("Even if you are only peripherally interested in astrology, it may still be fun to find out if your girlfriend's star matches yours!") alongside the usual notebooks, MP3 players and world clocks. (via WorldChanging)

It'd be interesting to get a closer look at one of these; on the website, it looks fairly promising, just from the specifications and screenshots. Though so did the Agenda VR3 Linux-based PDA, which turned out to be half-baked and next to unusable, once the novelty of calling up a UNIX shell on something without a keyboard wore off.

Via Substitute, another piece about high-definition TV (HDTV), and in particular, about how the resolution is so good that it brings out every wrinkle, blemish and imperfection on celebrities' faces. I've also heard it claimed that the spread of HDTV will drive the development and adoption of new make-up technologies (ultra-fine nanomaterial cosmetics sprayed on with high-precision airbrushes or what have you), to allow those celebrities to keep looking perfect under the HDTV camera's harsh scrutiny.

Though, when one thinks about it, this sounds suspicious. Is HDTV really more detailed than the 35mm film that is shown in multiplexes? This is unlikely; when film is digitised for processing, each frame measures something like 3,000 pixels across; if HDTV exceeds this, a consumer HDTV set would have a higher resolution than the best computer monitor on the market (and this includes those used by graphic professionals). Not to mention that HDTV production would depend on digital video cameras at the very bleeding edge of the technology.

I suspect that the various stories about HDTV being so good that it shows you every pore on a celebrity's previously perfect-looking face is a sneaky piece of viral marketing, designed by some agency to spread buzz about this expensive new technology. It's a well-crafted piece, tapping into fascination with celebrities and the desire to see them brought down to earth and stripped of their seemingly superhuman perfection. And HDTV is going to need a lot of help in getting off the ground (and recouping investment); with passive TV viewership declining as more people seek out more interactive technologies, the number of people ready to invest in HDTV (which is, essentially, the same deal as regular TV, only with better image quality) off the bat isn't great. 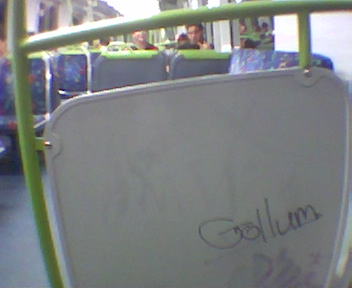