a highway cutting through the outer suburban sprawl, by night: 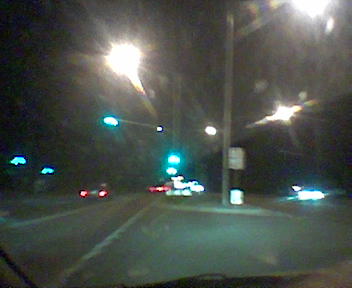 I went to a Film Festival screening today, seeing Skinhead Attitude, a documentary about the history of the skinhead movement. It outlined the origins of skinhead in the UK ska scene, the spread of it among sharp young working-class people who were in it for the music, the hijacking of the skinhead thing by the neo-Nazis (starting with Skrewdriver and going on to UK terrorist group Combat 18 and some rather scary American Nazis who probably have never heard of ska in their suburban compounds in Texas), the corresponding rise of the anti-racist skinhead movement (SHARP and such), and the increasing marginalisation from both sides of the "authentic" skinheads who are just in it for the music and the culture. The documentary, in French and English (with alternating subtitles), consisted of interviews with various people (old-school skinheads, band members, and some racists and anti-racists as well), footage of gigs, gatherings, incidents and of locations (a riot at a concert in Krakow, the killing of two anti-racists by neo-Nazis in Nevada, London from a train window, and so on). I found it rather interesting.

Before this, there was a short film; a photoessay on the French 1970s rocker/biker/neo-Nazi subcultures, with a narration over the top by the photographer, a young Jewish man who was a rocker and ended up hanging around with neo-Nazis and taking photos.