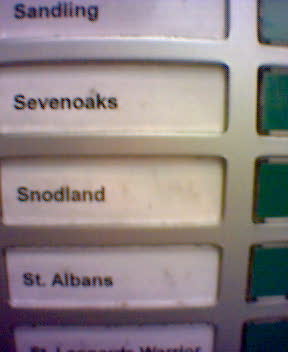 "Snodland" sounds more like a video game (of the colourful platform/puzzle variety) than a place in the south of England, though, apparently, that's what it is.

A US federal appeals court has ruled that all samples must be paid for, regardless whether or not they're recognisable, thus cementing the basis of the permission culture, where everything is intellectual property which must be licensed. Welcome to the Digital Millennium; make sure you've paid your way

The ruling says artists must pay for not only large samples of another artist's work, but also snippets -- smaller notes, chords and beats that are not the artist's original composition -- which had previously been legal, according to The Associated Press

"If you cannot pirate the whole sound recording, can you 'lift' or 'sample' something less than the whole? Our answer to that question is in the negative."

Thank God they're protecting valuable intellectual property from lawless piracy, otherwise capitalism as we know it would collapse and we'd enter a new dark age.