Your Humble Narrator went to see (a reconstituted version of) 1980s new-romantics Visage play in Soho.

The first support band was Suzerain, already mentioned on these pages. Suffice it to say that they were very good; somewhere between Duran Duran and David Bowie, only with more guitar solos. They have the pop sensibility down pat and the rock-star stage presence, and should go far. It's somewhat surprising that they haven't been signed yet.

Trademark were amusing; three spoddy-looking chaps in raincoats (and later fairy-light-festooned lab coats) playing a warm and somewhat geeky electropop (think something like Barcelona without the guitars, or perhaps Baxendale meets Casionova). The front man looked ever so much like Jack Morgan from Look Around You, and they did a love song with the words "simple harmonic motion" in the lyrics, so where can you go wrong?

Visage (or, more accurately, Visage Mk. II) came on and did a ~20-minute set, a preview of their main gig this Saturday. Steve Strange had hair like a less flamboyant Robert Smith and was wearing something that looked like a torn, paint-splattered military uniform of some sort, and his mascara seemed somewhat smeared. In performance, he wasn't quite the ice queen I expected; he danced around with a slightly goofy grin, and interacted with the audience, laying on hands. At one stage, he took a glow stick from a gaggle of goths near the stage and made their day. Anyway, Visage Mk. II did all old songs (The Damned Don't Cry, Love Glove, We Move, The Anvil and, of course, their genre-defining classic of existentialist disco, Fade To Grey). The songs sounded somewhat different than the old records, being played on modern digital-modelling synths. (Most of the songs had a standard post-90s 4/4 dance beat, for one).

The music played by the DJ between sets was a mix of 80s synthpop/electronic pop (Human League, A-Ha, Dead Or Alive, Bananarama), with small amounts of glam (Transvision Vamp and Electric Six both got a play) and a few goth-club crowd-pleasers (some Depeche Mode, NIN, and an EBM/darkwave/futurepop/power-electronics/whatever they call it version of Purcell's Music for the Funeral of Queen Mary, a.k.a. the theme from A Clockwork Orange). Your Humble Narrator left sometime before the DJ got around to playing Headhunter (which he surely must have; it seems to be the "Gotta Be Startin' Something" of people who wear a lot of black).

Anyway, there are photos here. My camera battery ran down towards the end, requiring me to shoot without the screen, which is why quality and quantity drop off a bit.

Got an empty room, some free time and the urge to amuse and confuse visitors? Why not make a sideways room? 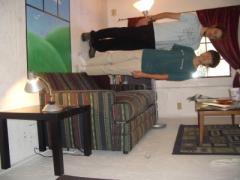