In Australia, unemployed hackers can now fulfil their work-for-the-dole obligations by contributing to open-source projects.

More revelations have emerged about Frank Sinatra's mafia links; this time, he wasn't just doing deals with the mob to help his business interests, but actively working for them as a courier:

As he passed through customs, (Jerry) Lewis says, Sinatra was stopped by officials who started to open the suitcase he was carrying. Inside, says Lewis, were notes to the value of "three and a half million in 50s".

But the customs officers were distracted by the crowds of people trying to catch a glimpse of the singer and aborted their search.

Had they not, claims Lewis, "we would never have heard of him again".

So there's a parallel universe in which Sinatra got caught smuggling cash for the mafia and ended up embedded in concrete somewhere?

Here in London, the local NME-Carling-commercial-indie-rock station Xfm (for the Melbourne people, they're sort of like Nova FM or an ad-saturated JJJ) has been running a poster campaign for a radio show, featuring the graphic below: 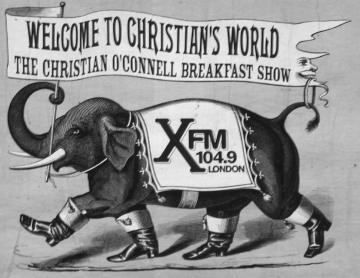 The graphic looked familiar at first; I then recalled that either it or a very similar graphic, right down to the face on the banner gripping the hoop, was used in a flyer for a 1960s Australian garage-rock/beat group (I believe it may have been Running Jumping Standing Still), reproduced in Iain McIntyre's book Wild About You!.

I wonder where the original graphic is from.