Christmas Day With My New Girlfriend's Family As A Circa-1982 Text-Based Computer Adventure Game:

A piece of ham

Indonesian embassy in Canberra evacuated after biological weapon scare, when white powder in an envelope sent to the embassy tested positive for a bacillus related to anthrax. It is believed extremely unlikely that the incident is unconnected to the recent conviction of Australian Schapelle Corby (who, incidentally, is said to have become the newest client of celebrity agent Harry M. Miller) for drug trafficking in Bali.

It was sickening enough to hear of Australians calling tsunami relief charities and demanding their donations back over this incident; this takes it to a whole new level. If nothing else, the possibility that people who form their beliefs from tabloids and reality-TV shows have access to biological weapons is truly alarming. The human race is doomed. 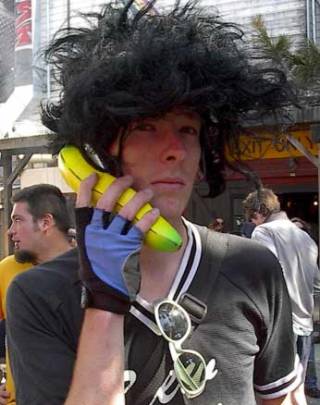 Even after EMI's herculaean effort to keep the new album from schmaltz-rockers Coldplay off the net (giving it to reviewers as "The Fir Trees", routinely searching pressing-plant employees, sending nastygrams to student radio stations), the terrorists pirates have already won. Mind you, the fact that EMI's goons couldn't routinely strip-search the entire population of Japan, where the album was released shortly before ending up on the file-sharing networks, probably had something to do with it. Oops!

The Demos thinktank in the UK claims that democracy is facing a crisis of legitimacy, with the public losing faith in the trustworthiness of leaders and the integrity of the political process. This appears to be result of the Blair Doctrine, which holds that in the short term, honesty is a liability and a mastery of weasel words and spin, a good relationship with the press and a faith in the public's short attention span are what counts.

It probably also has to do with the disconnexion between the polite fiction of democratic accountability and the reality of where the power really rests. For example, it's likely that Blair had no choice but to do whatever Washington ordered as far as Iraq went (as Britain has surrendered most foreign-policy sovereignty to the US since World War 2, though maintains the illusion of being an autonomous world power, even having a nuclear arsenal of its own (operated by US technicians)), and to spin it increasingly tortuously into the context of an independent decision, with increasingly bizarre results.

Anyway, the article claims that the main parties have become obsessed with a "strong leader myth", and that the solution is to recast democracy to the neighbourhood level. It is reported that Downing Street has been listening, and is "experimenting with new more direct forms of consultation with the electorate", "experimenting with" presumably translating as "looking at ways to rig".

Meanwhile, the Lib Dems have their own crisis with claims that Charles Kennedy has adopted his own version of the Blair Doctrine and put the party too much under the influence of campaign strategists.