Scientists in Switzerland have developed a robot cockroach convincing enough to infiltrate cockroach societies and subvert them from within, with the other roaches never twigging to the fact that their new companion was a robot:

That's part of what the scientists have been successful at showing with InsBot. In their latest experiment, the miniature robot drew the group of insects from a darkly lighted den to a more lit location, despite the roaches' affinity for low lighting. The roaches followed InsBot for the companionship.

Scientists believe that if they can use robots to mimic and respond to animals then they could eventually control the animals' behaviour. For example, they could use robots to stop sheep from jumping off cliffs or to migrate cockroaches out of infested homes. Progress in the field could ultimately influence and aid in scientific fields like medicine, agriculture and ethology (which is the study of animal behaviour).

As London anxiously gets back onto the tube trains, the familiar discomforts of the journey are taking on new dimensions of psychological anxiety:

It's a mind-game being played out all over the Tube network, and indeed on many trains and buses throughout the country. It's performed in silence, with people unsure of their neighbours' motives and guilty about their own feelings of suspicion.

Even though people say little when they're travelling, there's plenty going on inside - fears of danger, changed routes, calculations to avoid risks, guilt at making stereotypical assumptions, anger at being unfairly distrusted.

"I do not take my rucksack to work anymore, which had my lunch and work shirt. I would rather wear a dirty shirt left at work than be looked at suspiciously. I also wear a T-shirt to work now, as I am afraid to wear too much, after the shooting," he writes.

"As I got on the tube with my rucksack, a fellow passenger saw me, waited a second then got up, to wait on the platform for the next train," writes Dev.

South Asian and Middle Eastern-looking commuters with large bags, as one might imagine, are feeling the brunt of the distrust:

Marcus, who says his family are Greek-Cypriot, has devised a strategy to avoid "odd looks" on the Tube (which he attributes to his Mediterranean appearance). To make himself seem non-threatening, he now wears a Make Poverty History wristband and makes a point of reading the Economist.

I can't avoid carrying a big rucksack with my mobile office in when I travel. As I'm an Asian male that's been getting suspicious looks, I've taken to carrying a bottle of wine as if I'm taking it home for dinner. It's ironic, I don't even like wine, but it's a clear visual symbol that says I'm not a fanatic Islamic bomber.

Of course, now that the secret's out, the next crop of suicide bombers could well be queueing up for Make Poverty History armbands, wine bottles and other non-threatening-looking props.

There are also people who have stopped wearing their MP3 players or iPods because of worries about trailing wires or not hearing orders from the police.

Though, OTOH, one of the original bombing victims reportedly retained her hearing because of the iPod earphones she was wearing shielding her ears (and her life because the laptop on her back took the brunt of the blast). Perhaps Apple should use her in an ad campaign? 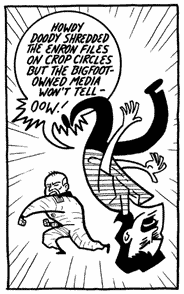 It looks like the new Doctor Who will be attired in a suit, a trenchcoat and sneakers, in what the BBC are calling a "geek chic" look; in other words, somewhere between John Constantine in the Hellblazer comics and Jarvis Cocker sans glasses.

For a while they had me worried that the BBC were trying to jump on the NME New Wave Glamorous Indie™ Art Rock™ Revival bandwagon and making the Doctor an emaciated androgyne in a tight-black-suit/black-shirt/anorexically-thin-red-tie combo.

No, this blog isn't dead; Your Humble Narrator was away in Italy for the weekend, with limited internet access. On Thursday, I managed to dodge suicide bombers to get to the airport in time for the plane. Friday and part of Saturday I spent in Florence, managing to take quite a few photos (btw, that Hemingway chocolate place is as good as Cory says it is; particularly the Montezuma). I also visited a few other places; more photos to be posted.

Btw, seen on one of those scooter-trucks belonging to a maintenance firm in Florence: