An image that has been floating around recently: 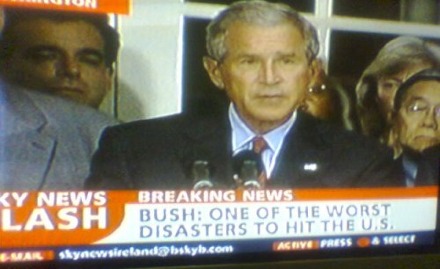 Whether it was an accidental juxtaposition or whether someone in Murdoch's UK operations dissents from the party line, I do not know.

A US peace activist visiting Australia has been arrested by the Federal Police as he travelled to a workshop on the US peace movement. The Immigration Department has stated that Scott Parkin, of Zmag, was arrested on "character grounds", and would be deported "as soon as practicable". (This is believed to be under provisions for cancelling visas where "a person's presence is, or would be, prejudicial to relations between Australia and a foreign country", which means that criticising US foreign policy is now officially an Un-Australian Activity.) Non-Government politicians, environmentalists and refugee-loving latte-leftist terrsymps are up in arms; the Herald-Sun-reading silent majority of suburban battlers, however, is on record as being "relaxed and comfortable".

Is the Australian government abusing its anti-terrorism powers to suppress opposing voices? Shortly after 9/11 in the US, Green Party activists found themselves banned from flying and feminists in San Francisco were investigated for al-Qaeda sympathies. Given the Australian authorities' fine tradition of creativity in defending the status quo (think Joh Bjelke-Petersen's police force), I wouldn't rule out that sort of thing being the unwritten law of the land.