From the Fly (a monthly free street press publication in London, with a bias towards populist NME/Carling/Xfm new-wave/garage rock; The Wire it ain't), and specifically, its review of the next Franz Ferdinand album:

"And yet, there was no warning in pre-Franzworld that artrock was just about to grab the world by its neckerchief and force it to put its dancing shoes on."

Which is proof that "artrock" has lost its meaning. It used to mean artistically conceptual rock music, from Bowie to Radiohead. Now, "artrock" is a fashion stance, copying a small subset of actual art rock bands from around 1980, and a narrowly circumscribed checklist of elements. Staccato guitar line lifted from an Interpol record? Check. Describable as "edgy" or "angular"? Check. Sharp suits? Androgyny or sexual ambiguity? Check. It's artrock. Just like The Killers, that NKOTB of the Carling New Wave.

Today's hack of the day: Turn your ham(p)ster into a fighting machine: 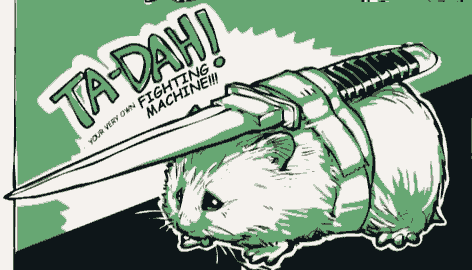 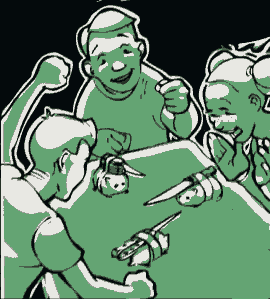 The anarchic, anyone-can-edit model of Wikipedia may soon be tested in court; the Council of Australian Jewry is considering suing Wikipedia for allowing a vandalised article to be published on its site. The vandalised article, on recently deceased Nazi-hunter Simon Wiesenthal, contained unsavoury sexual accusations.

If it does go to court and their case stands up (and the idea of an anonymous wiki with no personal responsibility does not feature in most defamation laws), it could be the end of the wiki, or at least of the pseudonymously editable one. Wikipedia could continue on either being moderated or requiring all contributors to have verified identities kept on file and assume legal liability for their edits. Which would be somewhat of a chilling effect, though it could be argued that that's how the real world works, and the present Wikipedia is no more legally sustainable than the original Napster was. And so, another piece of the utopian anarchy of the internet (you know, that ungoverned interzone that interprets censorship as damage and routes around it) may soon fall to the encroaching tide of harsh reality.

Update: I have been informed that any such lawsuit would be a non-starter. For one, one cannot legally libel, slander or defame a deceased person, and secondly, the Scientologists have already tried this sort of thing and failed. Note that it is the supermarket's own brand, and undoubtedly says a lot about the ribald English sense of humour and/or national obsession with large breasts.