The New York Times has discovered that, in clothing and accessories, the skull is the Happy Face of the 2000s:

"This is such a huge gripe of mine," said Voltaire, a musician in New York and the author of "What is Goth?", a kind of "Preppy Handbook" for the living dead. "Throughout hundreds of years of history, what the skull has communicated is, 'I am dangerous.' That's where the irony is. You can buy dangerous for $11.99 at Kmart."

For years Voltaire was the happy owner of several skull-motif sweaters hand-knit by an eccentric Englishwoman. He recounted that a woman stopped him the other day on an East Village street to admire the one he was wearing. "She said: 'I love your sweater. Is it Ralph Lauren?' Then I found out that Ralph Lauren has a whole store that sells skull stuff."

From what I gathered, the trajectory of the mainstreaming of skulls was: they started with variously scary misfit cultures (outlaw bikers, hot-rodders, or even actual murdering pirates if you go far back enough), then they were gradually adopted by less scary cultures (like metalheads and goths, both of which tend to be more amusing than intimidating). Then the Vice-twats and electrocoolsies (or "fashion goths", as Momus calls them) picked them up ironically, and soon every coke-snorting trustafarian in Williamsburg and Hoxton was wearing stuff with skulls on it. Then, of course, the cool hunters picked up on it, and soon H&M was selling socks with skulls on them and commercial pop bands soon had the full complement of skulls and lightning bolts on their cover artwork.

A study at the University of Leicester has produced a global map of happiness, by country. 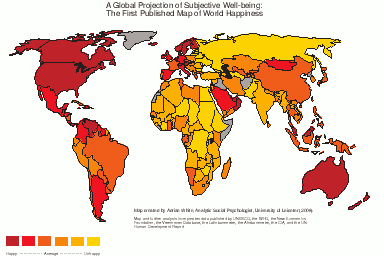 According to the study's methodology, the happiest countries on Earth are, in descending order, Denmark, Switzerland, Austria, Iceland and The Bahamas. (I would have thought that Nordic countries such as Iceland would have been penalised by the long winter nights and incidence of Seasonal Affective Disorder; perhaps the spectacular landscapes and general coolness makes up for that.) The USA is 23rd ("We're #23!"), and the UK is #41; meanwhile, various Japanophiles will be disappointed to find that Japan scrapes in at #90, being slightly sadder than the median. The least happy places surveyed are Zimbabwe and Burundi.

Looking at the map, which is shaded according to colour, certain patterns emerge. Scandinavia and Finland are the same sanguine shade of red as Iceland and the US; Ireland is happier than the UK, and France and Portugal are the least happy countries in western Europe. Meanwhile, Australia and New Zealand are both in the top shade of happiness, as is Bhutan; Africa is generally a deeply unhappy place and Russia is quite gloomy. Not surprisingly, no data exists for Iraq, Afghanistan, Liberia, Somalia or North Korea, though one can guess that they're probably not brimming with joy.

It has been announced that the star of the Harry Potter movies, Daniel Radcliffe, is to appear naked in a West End play. That loud "OMG SQUEE" you just heard was a million Potter fangirls around the world.