Remember Gracenote, the firm that bought the user-contributed CDDB database and locked it up, locking open-source clients out of it? Well, they've just been bought by Sony. I wonder what this will mean: with Sony BMG being a pillar of the RIAA, will owning a database which receives a notification every time somebody rips a CD be a useful weapon in the War On Copying? And will Apple keep using Gracenote for iTunes now that it's controlled by a rival?

Japan's Wakayama Electric Railway has increased its patronage by appointing a cat as stationmaster of an unmanned railway station. The cat, a 7-year-old tortoiseshell cat named Tama, can be seen wearing a specially made cap in her office inside a former ticket window at Kishi station on the Kishigawa line. 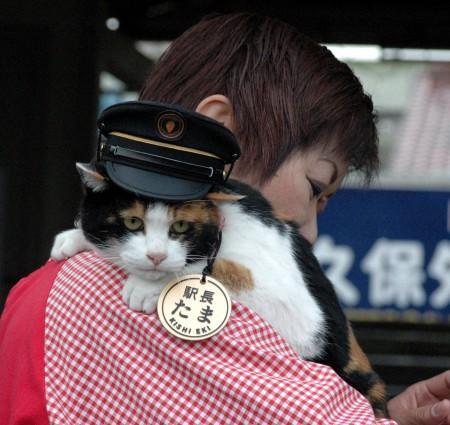 Two other cats have been appointed as "deputy stationmasters", and a human official has been hired to take care of the cats.

Could this be the worst security hole ever? The Oklahoma Department of Corrections' sex offender database site allowed users to issue arbitrary SQL queries on their database (which contained the complete details of anyone who has ever been on the wrong side of the law). The "print friendly link" took, as its argument, a SQL query, which it would then execute. Which, of course, means that not only could someone get enough details about anyone in the database to steal their identity, but could quite possibly insert arbitrary data into the government's official sex offender database. You can probably imagine the kinds of fun that someone could have with that.

Muslim scientists have called for Mecca time to replace Greenwich Mean Time as the international standard. Other than the religious argument (not likely to sway many non-Muslims) and the postcolonial argument, they contend that unlike other longitudes, Mecca's was "in perfect alignment to magnetic north":

He said the English had imposed GMT on the rest of the world by force when Britain was a big colonial power, and it was about time that changed.

A prominent cleric, Sheikh Youssef al-Qaradawy, said modern science had at last provided evidence that Mecca was the true centre of the Earth; proof, he said, of the greatness of the Muslim "qibla" - the Arabic word for the direction Muslims turn to when they pray.

(Youssef al-Qadarawy? Where have I heard that name before?)

The meeting in Qatar is part of a popular trend in some Muslim societies of seeking to find Koranic precedents for modern science.