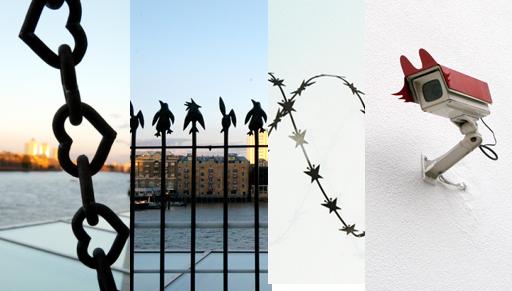 It's not clear how much of this is sincerely intended to fill a gap in the market and how much is critiquing or poking fun at of the siege mentality of contemporary society and its normalisation as a banal aspect of consumer capitalism. The pieces shown are said to be actual manufactured items which may be ordered or bought in various designy shops, though they have mostly been exhibited in art galleries.

This blog has been quiet recently, as your humble correspondent spent the past few days off the grid, attending the ATP vs. Pitchfork festival at Camber Sands (site of the famous Bowlie Weekender).

The festival was great. Being set in a holiday camp (where, presumably, working-class families went to spend their holidays in the days after the 1950s consumer boom but before cheap flights), camping in mud and queueing to relieve oneself into a pit did not enter into the equation; instead, the attendees stayed in chalets (which, despite the name, aren't wooden cabins of Alpine design, but blocks of somewhat minimal one-bedroom flats; my one reminded me of the first flat I ever rented). While the facilities were mass-market, the music wasn't; the bands themselves were chosen by ATP and Pitchfork, hence the standards were quite reasonable, if perhaps a bit hipsterish in places. As well as bands, there were DJs in various venues, and in the chalets, the TVs carried two extra stations of cult films, documentaries and shorts, one programmed by ATP and the other by Pitchfork.

Anyway. some highlights were:

I greatly enjoyed it, and will definitely consider going to a future ATP. (Next weekend's one at Minehead's out of the question, though, being somewhat too soon. I probably won't make it to the New York one in September either.)

Anyway, there are photos here.