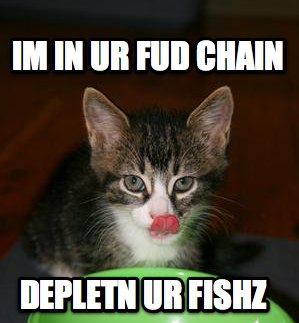 Apparently the world's supplies of fish are threatened by cats eating them all. Not predatory feral cats, but the pampered domestic variety, who consume increasingly large quantities of tinned fish.

"What is also interesting is that, in Australia, pet cats are eating an estimated 13.7 kilograms of fish a year which far exceeds the Australian average (human) per capita fish and seafood consumption of around 11 kilograms.

Wild forage fish, which includes sardines, herrings and anchovies, are an important link in the marine food chain, as part of the diet of larger fish like tuna and swordfish. 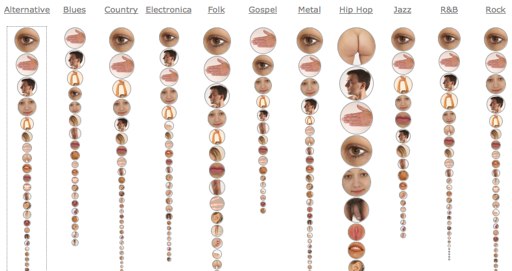 It's interesting to note that the eyes dominate most genres, from country to electronica. Hands dominate gospel (naturally) and the blues, which also mentions the head prominently (as in "woke up this mornin' with an awful achin'", presumably). The big outlier there is hip-hop/rap, which is all about the booty.

Canon have announced the next crop of PowerShot cameras, at least in the A and S series. As expected, they're still running the megapixel race hard, cramming more and more increasingly tiny pixels into a pocket-sized sensor to give the public excitingly bigger numbers, whilst ignoring the growing chorus of criticism that more pixels aren't better. So when you buy one and realise that your new 10-megapixel photos look like crap compared to the old A570IS you just replaced (which didn't look that crash hot when compared to the silky-smooth dynamic range from your ancient 4MP PowerShot G2), you'll know why, and wish you had gone and bought a camera with fewer pixels. Well, if they actually still made them, that is.

You can blame the gullible idiots who are convinced that more pixels is better, have no idea of esoteric concepts such as "noise" or "dynamic range", and will rush out to buy anything with a higher pixel count, dooming any compact camera with fewer, decent-sized pixels to certain death in the marketplace. Though you'd think that there'd be enough people with a clue and a demand for a high-quality pocket-sized camera with the right compromises made in its design parameters to give the best (as opposed to biggest) images you can expect from that size, for Canon (or someone) to bother making such a line.

Japan now has its own tartan. The Sakura tartan (after the Japanese word for cherry blossom) is believed to be the first design to include the colour pink, and was influenced by Thomas Glover, a 19th-century Scotsman who moved to Japan, was involved in its industrialisation and became known as the "Scottish Samurai". It is expected to be included in a national tartan register being planned by the Scottish government.