The Times goes to DEFCON, interviews some hax0rs:

He tells me about one of his cases involving Symbolic Motors in La Jolla, California. Symbolic, which supplies Ferraris, Lotuses, Aston Martins and Bentleys to the stars, is arguably the most lucrative dealership in the States. It wanted to find out just how good its multi-million dollar security system was, so Pyr0 and his friends Ryan Jones and Chris Nickerson, who call themselves ethical hackers, went to work.

“First we did a bit of dumpster-diving, looking in their trash, to find out who their computer company was,” says the spiky-haired Pyr0. “Then I paid a visit, posing as one of their technicians and got access to the company's servers. I secretly installed a wireless network behind a desk while I was there, which allowed Ryan, who was in a car outside, to begin hacking into their computer system remotely.” While Jones was downloading Symbolic's files - details of sales, prices, film-star customers and so on - Pyr0 was wandering around the building taking pictures. There was no alarm security above the ground-floor showroom and the roof skylights were not alarmed. In the showroom, he worked out the blind spots in an array of motion sensors.

That night, they broke in through the unalarmed skylights, exploited the motion sensors' blind spots, crawled to the alarm keypad and switched off the system. They opened the showroom doors, drove out a Lotus and returned it, parking it the wrong way round.

This year's if.comedy award (formerly named after a brand of mineral water) at the Edinburgh Fringe has gone to Irish comic David O'Doherty. And quite deservedly too, judging by an earlier performance of his I saw (at Josie Long's Splendid Evening, at the literary festival at Southbank). With any luck it'll mean we'll see more of him.

OpenTape is a open-source (PHP-based) implementation of the late lamented Muxtape, a web app which allowed people to make streamable online mix tapes. Now you too can get taken down by the RIAA. 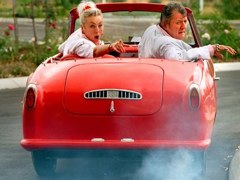