The world's longest-ruling head of state, Gabon's President Omar Bongo, is dead, after ruling the country for 42 years, i.e., since independence from France. 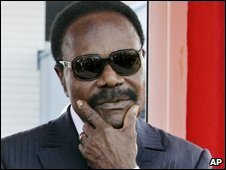 Other than having had staying power, Omar Bongo seems to have lived up to his bodacious-sounding name, as reported here five years ago.

Some news on the computer music front: version 2.0 of the veritable Windows audio patching environment AudioMulch is now out, and it's now available for OSX. It costs US$189, though, so it may not be everyone's cup of tea; however, the objects are higher level than those in other environments like Pd, and there's less fiddling around with oscillators involved before you actually start getting interesting noises.

Meanwhile, I somehow managed to miss the fact that the veritable MDA VST plugins are now open-source. And for some reason, there are precompiled VST binaries for Linux. It turns out that people are using Steinberg's VST plugin standard on Linux (presumably unofficially, though).

The EU election results are in. It is, of course, a disastrous result for New Labour, with them winning only 11 seats, finishing third behind a single-issue minor party.

Britain also lurched sharply to the right. Everyone is, of course, talking about the BNP, a party which strenuously denies being fascist or racist with one breath and then talks about kicking dark-skinned people out of Britain with the next. They got two MEPs up. Though as attention-grabbing as neo-Nazis and those of that ilk are, the real news is elsewhere; the UKIP (a right-wing populist party currently focussed on pulling Britain out of the EU, though whose MEPs have in the past railed against womens' rights; they're like the BNP minus the overt racism and fascism) came second, winning 13 seats. First, of course, were the Tories, who, whilst paying lip service to centrism in Britain, have allied themselves with the right-wing fringe in the EU, having left the centre-right European People's Party and joined a new fringe-right bloc. The 24 Tory MEPs just elected will ally themselves with right-wing hardliners such as Poland's rabidly illiberal Law and Justice Party and Latvia's Fatherland and Freedom Party. The Greens, meanwhile, only scored two seats and a whisker more votes than the BNP, and the traditional leftist parties seem to have vanished into thin air.

If the UKIP are going to be the New Tory Britain's opposition party, they'll have to come up with some policies other than pulling Britain out of the EU and kicking all the Polish plumbers out. Such as, perhaps, bringing back the death penalty, national service or public flogging.