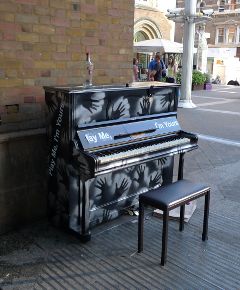 An artist has placed 30 street pianos in the City of London. The pianos are padlocked to prevent antisocial people from vandalising them and bear the legend "Play Me, I'm Yours".

Your Humble Correspondent saw one such piano this afternoon at Liverpool Street station, adjacent to the exit to the station plaza. I walked up to it, and, before I could approach it, was approached by a beggar, who presumably had found a lucrative pitch around the piano. I, of course, did what any decent person would have done and gave the poor wretch a crisp ten-pound note.* After he was off, I approached the piano, wondering whether it actually worked.

Before I could touch the keyboard, I heard another voice. Another man, with bad skin and beady eyes, had walked up to me, and was pointing to a discarded Tesco bag on the ground near the piano.

I assured him that it wasn't, and returned my attentions to the piano. I managed to find that the lowermost D key did actually work. My unwelcome companion, however, would not be ignored.

"It's a disgrace, that's what it is! People leaving shopping bags around."

It seems that he had a chip on his shoulder and a lot to say, and had found someone to say it to, or at least to say it at. In any case, he didn't have an audience for long; I abandoned the piano and left. The piano went unplayed; the only people who found it useful, it seems, were Trevor the Tramp and Mr. Cranky.

I suspect that ideas like street pianos, while they may well work in, say, Berlin or Copenhagen or somewhere, don't work in London; because of the culture of London and/or England, they would attract the antisocial who would render them unusable for their intended purpose; i.e., awakening the spirit of creative play in random passers-by. This comes down to the social contract of London.

To live in London for any length of time is to learn the rule that other people are at best an annoyance. There are too many of them and too little space to go around. When they're not assaulting your hearing with their tinny music-playing mobile phones, accosting you for money or subjecting you to their inanities and prejudices, they're taking up space you want to move into, or looking like they might well threaten to do one of these things. One deliberately avoids eye contact, avoids acknowledging other people as anything more than roughly human-sized obstacles, lest the barrier come down and one find oneself subjected to the outflowings of the (quite probably disagreeable) personality of the entity sitting across the Tube carriage. That is, in the event that they don't start moving away from the weirdo who's making eye contact with them. People in general are, the belief goes, not very nice. (There is a technical term used for this state of being; it starts with C.)

Of course, the flipside of believing that people are, as a rule, unpleasant is to believe that being unpleasant is the accepted behaviour, part of the social contract. The only people who are conspicuously nice are charity muggers and con artists, i.e., people who are up to something. Unpleasantry is honesty.

Why this is so is not clear. The Left might claim that it's the legacy of Thatcherism and the dog-eat-dog market society, whereas the Right may pronounce gloomily that it is part of mankind's Hobbesian nature, the eternal war of all against all which can only be quelled with suppressive force from above. Perhaps it has something to do with England being what anthropologists call a "negative politeness" society (where politeness is about leaving people alone, rather than reaching out to them, as in a "positive politeness" society), and thus the only people who deign to enter the bubbles of mutually agreed isolation people were are outsiders, those with little to lose. Well, them and chuggers, but I digress. And some (including author Stuart Maconie) claim that it is only London that is like this, that if you head far enough north, or far enough south, people become actually quite agreeable.

* Actually, I lie. I headbutted him to the ground, kicked him repeatedly in the groin and told him, firmly, to be off lest I give him a proper hiding.