This week in lawsuits: Rupert Murdoch's News Corp. claims that it owns Skype's brand name, or at least the first three letters of it, and threatens to block Skype from trading under that name in the EU; the EU has agreed with News Corp., though Switzerland and Turkey (neither of which are in the EU) have sided with Skype. Perhaps we'll see another Gmail/Googlemail-style situation, in which case Skype chooses some other, more awkward-looking, moniker to trade under in the EU?

Meanwhile, after having digested Sun, Oracle are wasting no time in drawing a line under its open-source-friendly days; not only have they killed OpenSolaris (an issue which could affect dozens of people worldwide) but now they're suing Google for using Java intellectual property in Android, demanding hefty damages and the destruction of all Java-based Google code, i.e., the annihilation of the Android platform. (Of course, they could let it slide for a few billion dollars.) Google contend that the lawsuit is baseless, while Java architect and Sun co-founder James Gosling weighs in:

Oracle finally filed a patent lawsuit against Google. Not a big surprise. During the integration meetings between Sun and Oracle where we were being grilled about the patent situation between Sun and Google, we could see the Oracle lawyer's eyes sparkle. Filing patent suits was never in Sun's genetic code. Alas...

If Oracle are successful, they could stand to screw anyone who has ever used Java out of sizeable sums, whilst hastening Java's death as a platform of any credibility. (Unless this is thrown out of court with prejudice, I can see developers deserting Java hastily before Oracle's beady gaze descends upon them.)

Huffington Post co-founder Johan Peretti has posted a presentation, titled "Mormons, Mullets and Maniacs", on what makes online content "viral", i.e., likely to be passed along by bored people: 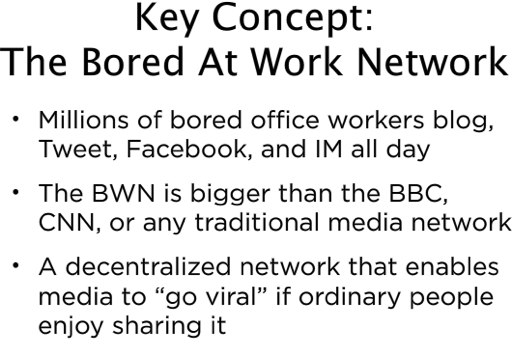 One key point: content that goes viral tends to appeal to people's personality disorders, or at least gives them an opportunity to score points, laugh at/put down those they disagree with, or express their obsessions, self-identification or narcissistic attention-seeking tendencies: 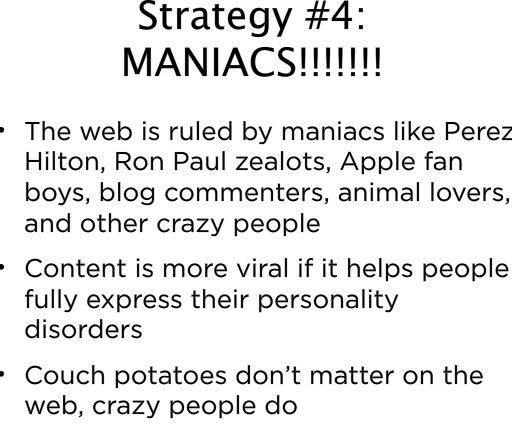 A study has claimed that rising rates of obesity in the US have resulted in almost a billion gallons of extra fuel consumption per year:

One key finding was that almost 1 billion gallons of gasoline per year can be attributed to passenger weight gain in non-commercial vehicles between 1960 and 2002--this translates to .7 percent of the total fuel used by passenger vehicles annually. Researchers also estimated that over 39 million gallons of fuel is used annually for every pound gained in average passenger weight. It is noted that while this is relatively small considering other factors such as more people on the roads, it is still a large amount of fuel that will continue to grow as the obesity rate increases.