Around Leicester Square and Chinatown, one sometimes sees a hoody with a traffic cone: The gentleman in question appears to be a busker of some sort; he sits on the pavement, his mouth around the narrow end of the cone, making trumpet noises into it, presumably in the hope that someone will toss him some coins for his trouble. His repertoire consists mostly of snatches of popular songs, old standards and themes.

The figure, sitting there in the middle of pedestrian traffic, burbling into a traffic cone, seemingly oblivious to the comings and goings of tourists and Londoners, seems like some non-specific element of as-yet undifferentiated satire or social criticism, 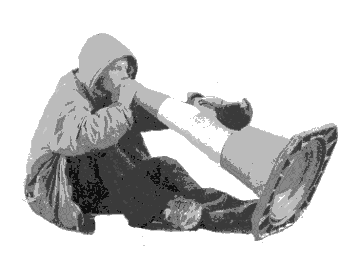 some amalgam of Hogarth and Banksy, Chris Morris and Thom Yorke. But what does he represent? Is he the feral Other, attired in the uniform of Britain's demonised youth, brazenly possessing a traffic cone he is unlikely to have acquired legitimately, and embodying threat? The drug-zombie, mouth clamped onto a pipe, oblivious to the morés of respectable society? Or the embattled Everyman, reacting to unreasonable circumstances in the only reasonable way, by curling up into a ball and gibbering? Is he a satire on the malaise of Broken Britain, or the mindset of the sorts of people who use the phrase "Broken Britain" in the mistaken belief that it was ever not, or both?