The inimitable Rhodri Marsden has some uplifting thoughts for the day, the day being, of course, the 14th of February:

I was 14 when someone first said to me: "You're not my type". It felt like a sophisticated comeback for a 14-year-old girl. She evidently knew what she wanted from a 14-year-old boy – mainly that he had to be older than 14. My dissimilarity to the socio-economic profile she'd carefully constructed meant that I had to change, quickly, to try and tick some more boxes, but in this particular case it seemed to involve joining Spandau Ballet, which was going to be tricky. Then a friend told me that it was shorthand for: "I'll never go out with you no matter what you do," which was demoralising, but also something of a relief because Spandau Ballet weren't keen.

But then you meet someone and you fall in love and out of love and then in love with someone else and before long you realise that you have a "type", too, which becomes reinforced by every subsequent romantic liaison. And then someone comes along who's not your type, but they like you and you remember the burning injustice you felt when you were 14, so you try to explain, as best you can, that it's not going to happen. But of course it doesn't go down well, because there's no excuse yet devised that's able to cushion that kind of blow. And then you drift on, with an uneasy feeling that your "type" has now become so scarce that there's probably only one example left on the planet and it's already been shot, stuffed and exhibited in some museum somewhere, with a label that simply reads: "Sorry."

In a similar (though less melancholic) vein, Rhodri also has a very entertaining book out consisting of dating catastrophies recounted through the medium of Twitter. (I attended a reading of this book last week; it was the best comedy show I have seen this year so far.)

For those more inclined to action, Occupy Valentine's Day (subtitle: "Down with couple-talism!"), a call to arms against the romance-industrial complex. Or something like that. 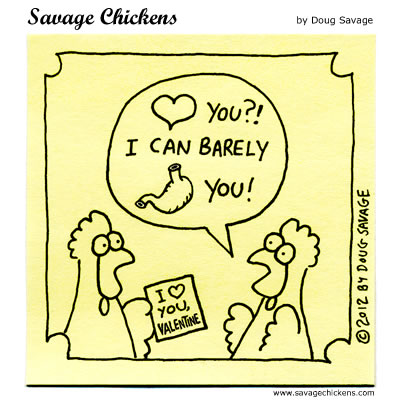 And one from Gemma Correll, a London-based illustrator specialising in all things twee: