Meanwhile in Australia, the right-wing opposition (and, at this point, almost inevitably the next government come September) has launched its alternative to the Labor government's National Broadband Network policy. It's an improvement on their previous policy (“rip it out, fill in the trenches and let the free market provide”), but nonetheless still falls well short. While Labor's network would bring high-speed fibre-optic connections straight to the home, giving 100 megabits per second (increasing to gigabit speeds), the Coalition's cut-rate plan would extend fibre only to boxes on the kerb, relying on a largely deteriorating copper infrastructure for the “last mile”, topping out at a theoretical 25 megabits per second (though that would be in ideal conditions; as with ADSL, distance from the node and cable condition would affect this). It would achieve this at about 2/3 of the cost of the all-fibre NBN. Or, the Pareto Principle: You're Doing It Wrong. 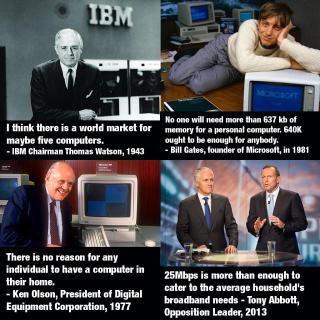 And while 25Mbps is an improvement on what we have now, and good enough for the sorts of things people do today (watching videos, shopping online, playing games), to say it will be good enough betrays a lack of imagination, or a deliberate narrowing of horizons that is all too familiar in Australian politics. Australia has always been the lucky country, borne at first on the sheep's back and now on Chinese demand for iron ore, which has led to a sclerotic apathy in terms of any sort of forward planning, in particular infrastructure and development. Combined with the stultifying conservatism of the Australian Right from Howard onwards, with its quasi-edenic visions of the conformistic white-picket-fenced utopia of the golden age of Menzies, the implicit message is clear: we are not Korea or Finland. We don't have a Nokia or a Samsung. We're a simple country. Our place in the world is to dig stuff up, put it on big ships and send it to China, and then to go home and relax in front of our big-screen TVs with a tinny of VB. That is all. It's a comfortable life, but we shouldn't get ideas beyond our station. All we need from the internet is to be able to shop online, pay the odd bill and download last week's episode of Jersey Shore a bit faster, and two rusty tin cans and a length of barbed wire fence is good enough for that. Well, that coupled with the sort of facile, nihilistically short-sighted anti-government rhetoric (infrastructure investment is “waste”; you can't prove it's not, so there) that the Abbott government-in-waiting has been borrowing from the US Tea Party.

The Coalition's policy has been roundly criticised by experts and mocked online as “fraudband”. However, all that means zip to the average outer-suburban swinging voters who get 100% of their information from the Murdoch press, right-wing shock jocks and/or 30-minute TV news programmes which are mostly sport, celebrity gossip and wacky human-interest stories, and who actually decide elections. So it looks like Australia, a country which coined the term “tyranny of distance” and was an early adopter of everything from telegraphy to mobile phones, will be stuck behind, paying off a 20th-century system and living much as the generation before them did, just because the bogans hate Julia Gillard.

Sociological term of the day: elite panic: basically, the tendency of those who have clambered to the top of an unequal society to take a brutally Hobbesian view of the rest of humanity, and to live in fear that those under their feet might not stay there:

Elites tend to believe in a venal, selfish, and essentially monstrous version of human nature, which I sometimes think is their own human nature. I mean, people don't become incredibly wealthy and powerful by being angelic, necessarily. They believe that only their power keeps the rest of us in line and that when it somehow shrinks away, our seething violence will rise to the surface -- that was very clear in Katrina. Timothy Garton Ash and Maureen Dowd and all these other people immediately jumped on the bandwagon and started writing commentaries based on the assumption that the rumors of mass violence during Katrina were true. A lot of people have never understood that the rumors were dispelled and that those things didn't actually happen; it's tragic.

But there's also an elite fear -- going back to the 19th century -- that there will be urban insurrection. It's a valid fear. I see these moments of crisis as moments of popular power and positive social change. The major example in my book is Mexico City, where the '85 earthquake prompted public disaffection with the one-party system and, therefore, the rebirth of civil society.

The relevance of this term is left as an exercise to the reader.