Tonight, I went to Hoxton Bar and Kitchen, for a gig celebrating the tenth birthday of local shoegaze night/label Sonic Cathedral (who formed a few months before I moved to the UK). The lineup consisted of Mark Gardiner (of Ride), Ulrich Schnauss and a mystery headliner. It was rumoured, and soon after that a pretty much open secret, who the headliner was: the gig was one night before the publicly announced (and quickly sold out) Slowdive show at the much larger Village Underground, and word started getting around that the returning shoegaze legends would be playing a warm-up gig the night before. The rumours turned out to be true, and the resulting gig even better than already high expectations.

Mark Gardiner played first; it was just him with a 12-string acoustic guitar and loop pedal, playing a few Ride songs and some more recent material. He got an enthusiastic reception. Afterward, the lights went down and Ulrich Schnauss and another musician took to the stage, controlling a table of synthesisers and mixers, accompanied by video projections of crystals, nighttime journeys, modern architecture and very large machinery in motion. Schnauss played some new material from an upcoming album, and this material seems to have a more electronic sound, for want of a better word.

Finally, after a few roadies placed the boards of guitar pedals on the stage, Slowdive went on, and started their set with their eponymous song, which was followed up Avalyn. Most of the set was comprised of songs from their EPs and Souvlaki, with one track (Catch The Breeze) from their debut album and two (Blue Skied An' Clear and Crazy For You) from Pygmalion. Their take on Crazy For You was one of the big surprises of the set; the original is a languid, evanescent number, drifting in and out as if made of gossamer. Their live version was a faster and more intense version, propelled by waves of processed guitars and driving percussion. It was, in a sense, as if Souvlaki-era Slowdive were playing a cover of Pygmalion-era Slowdive and adding their own interpretation to it. (And, in a sense, they were; Pygmalion was, in some ways, a work in progress; the band were fatally dropped by their label before they could play it live. Now, two decades on, they've seamlessly picked up where they left off.)

The other surprise was their cover of Syd Barrett's Golden Hair, which they had never played live. Their rendition developed on the version they recorded but was considerably richer, seeming to build on where the bands that have come along in the two decades since (such as Mogwai, iLiKETRAiNS and Explosions In The Sky, to name three) have taken the loosely defined genre; the dynamics seemed that much more glorious. 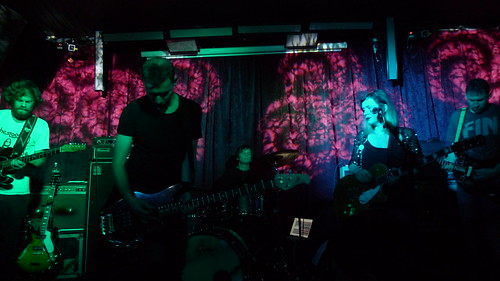 Slowdive were impressive. Not just impressive in the sense of competently playing some old favourites and hitting that sweet spot of nostalgia (though the show certainly did achieve that), or good for a band who reformed after some 19 years, but impressive by the standards one might judge any band. If one didn't know that this was their first gig since 1995, one would never have guessed; there was a freshness and vitality to the performance. (As one who spent much of 1998 or so listening to Souvlaki on repeat and then scouring the internet for MP3s of out-of-print early EPs (then deleted and generally disdained, not fitting into the grunge/Britpop narrative), I of course cannot hear Slowdive with the ears of one unfamiliar with their work, but can speculate that my younger self, from the moment before he heard their recordings, would have been blown away.) In any case, this will undoubtedly rank highly in my gigs of 2014.