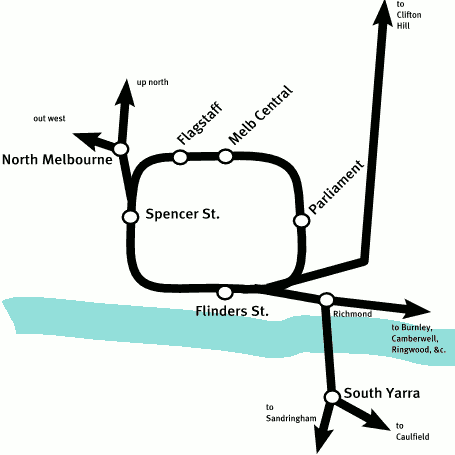 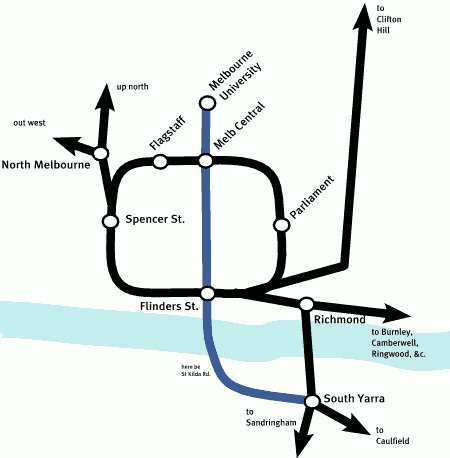 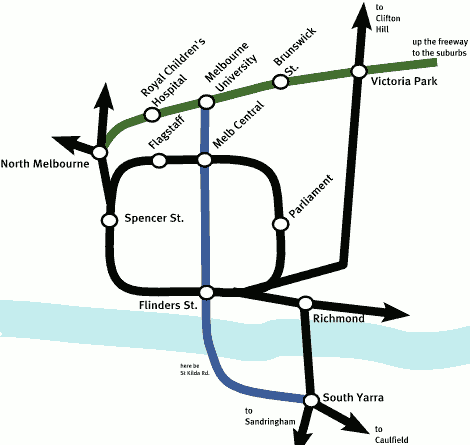 There are 5 comments on "The Melbourne Tube":

It's a difficult choice for a government. Spend money on inner city transport, when compared to the 'burbs it's already fantastic, or build new trainlines out to where they currently don't exist (Rowville, Doncaster etc.).

They should concentrate on the outer suburbs every time. Those are the people with the cars, the long trips, the lack of options for public transport. Distances in the Melbourne CBD are quite walkable. I heard Perth has a program of extending the trainlines further out every year as the suburbs expand. Non-radial lines across the suburbs are vital, too, if you really want to give people reasons not to drive cars. When I lived in the city, that was the main reason I drove. It was fine catching a train to Adelaide for work and back, but getting to another suburb might involve two trains and a bus - so I just got in the car.

I heard that the argument against non-radial lines is that only a tiny minority of trips are across suburbs, from, say, Glen Waverley to Dandenong or wherever. Melbourne's still very much a radial city.

And extending railway lines into the suburbs would have to include the Doncaster line down the Eastern Freeway. Which means either running it into the already congested City Loop or building an underground line under the inner north (which probably wouldn't cost more than adding another level to the Loop, but would offer more benefits).

The problem with Melbourne's present infrastructure is that everything is concentrated into a central loop and radial lines. Living in London, where there is no such centralisation, makes one realise the shortcomings of such a system.

The best realistic submission so far, by Michael Kerjman http://210.15.220.118/ewlna_submissions/EastWestResponse_060608_MichaelKerjman.pdf

It helps him in Melbourne a little as locally UK sirs are supposed for a paid employment only.