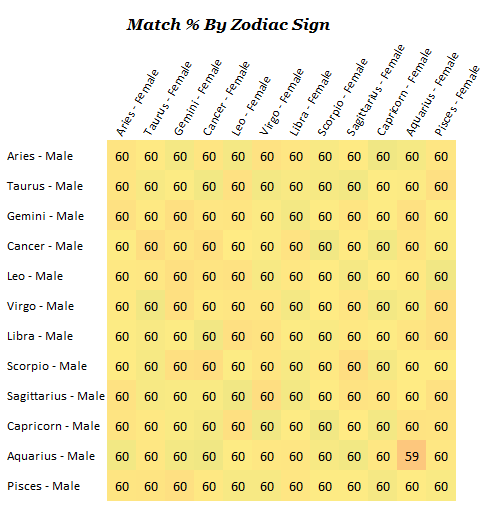 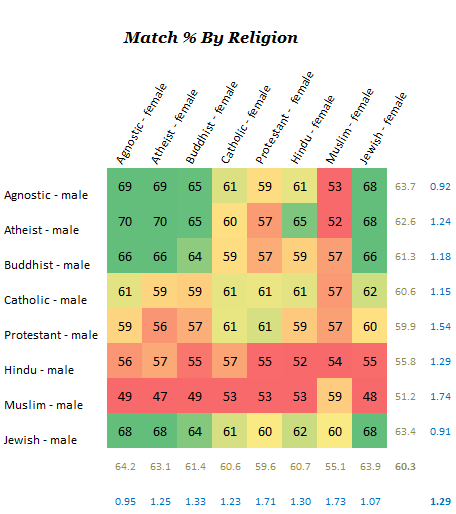 There are 4 comments on "Crunching the OKCupid database":

I suspect this is based on circular reasoning. They make claims about 'types' of people, based on counts of who 'matches' whom. The types are races and religions, which are guaranteed to spark headlines. But their definition of a 'match' is based on profile data: "If, for example, a couple match each other 71%, it means they are likely to like each other, based on their own individual definitions of what makes a person cool, sexy, and attractive, not ours." Well, for mine, if they're going to claim that person A is a match for person B, they'd want to watch them contact each other, meet, date ... to whatever extent one feels a relationship must go before the pair can be deemed a match - not just *assume* they will match based on criteria they typed in. Of course, a dating site wants to believe that profile data predict a match. But humans do not always get these predictions right ("s/he seemed right until we got married" etc). As far as I can tell there is no observation of 'post first meeting' events.

AFAIK, a match is derived from how two people answered a set of questions (from a large body of user-defined questions), and what significance they gave them. For example, if two people give the same answer to a question and mark it as important, this boosts their compatibility score more than if they gave the same answer and rated it as unimportant, and if they give conflicting answers and mark it as important, it decreases their compatibility score.

That's my gripe. Data like those don't predict much about attractiveness, which is quite embodied, as shown in a range of studies such as the classic "smell the t-shirt" paper (http://beheco.oxfordjournals.org/cgi/content/abstract/14/5/668). People might *think* they'll be attracted to someone who holds similar political beliefs, entertainment preferences and so on, but these turn out to be outweighed by visual and olfactory estimates of genetic suitability. An interesting study would be to see how well 'conscious preferences' such as profile data predict relationship longevity, seeing that those other studies suggest not. But instead of testing this, the dating site (self-servingly) assumes that they correlate, and goes on to draw conclusions about racial and religious groups that are probably quite outrageously unsupportable. (I say 'self-servingly' because dating sites are predicated on the idea that suitable partners can be found via data typed into a website, though this is probably not the case.)

I think you're onto something there.