Time to eat the dog? 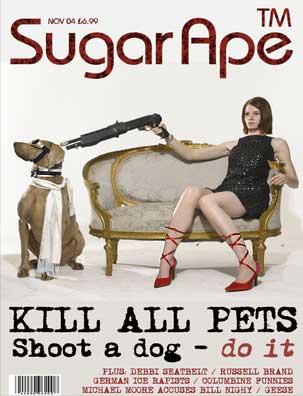 There are 5 comments on "Time to eat the dog?":

"two hamsters are equivalent to a plasma TV"

With the US dollar losing its viability as world reserve currency, and the need for a new unit of accounting which includes the externalities of climate change, I think we have a winner.

Professors Brenda and Robert Vale are free to make controversial claims about the "eco-footprints" of pets. It will probably help them sell books and make a lot of money. But their calculations smell bad. When <a href="http://climatesanity.wordpress.com/2009/10/23/bad-professors-bad-the-truth-about-eat-the-dog/"><b>real numbers from reliable sources</b></a> are used, it turns out that they got things wrong by a factor of twenty.

Thinking about the carbon footprint of my two dogs, the only resources they consume are food (half vegetables, half meat that humans wouldn't eat), water, and a small amount of space. The authors may be correct in their thesis, but the elephant in the room seems to be that people would have to consume orders of magnitude more resources than dogs, and so would be much more efficient targets for euthanasia, no?

What is clear is that EVERYTHING we humans do has an impact on our environment. In principle I agree with this article, however, I would want to see any of the precious animals in my life gone. I do however recognize that owning and caring for an animal does have a serious impact on the planet and should not be taken lightly. It is a luxury to be able to afford domesticated animals. That said, certain animals should not be domesticated.

To coincide with the Copenhagen climate conference and by public demand, George Michael will release a brand new version of his single, "Eat the Dog," on the 7th December on Last Christmas Records.