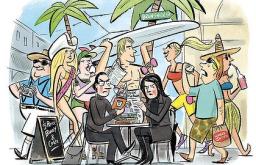 There are 1 comments on "The Melbourne/Sydney rivalry":