I have just spent a little over two weeks in Melbourne; I arrived on occasion of a conference on iOS development, but stayed longer to give me time to catch up with friends. It was my first visit to my old hometown in almost five years.

Melbourne is, I am relieved to say, still here. Just about. Some things are new, some things are gone, and some things remain constant. Gentrification keeps pushing the virtual Yarra that divides bourgeois and grungy Melbourne northward; it'd now be somewhere around Merri Creek and Brunswick Road. Fitzroy feels a bit more like South Yarra, a bit brasher and less bohemian. Hip-hop, laptop R&B and house music have largely displaced skronky/jangly indie-rock as its soundtrack. Brunswick Street is now is also a destination for stag/hen-party buses. 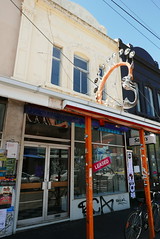 Some parts of it are gone (PolyEster Books has closed down, its shopfront a sad shell with a LEASED sign on it and the old roof sign awaiting its inevitable demolition, and the T-shirt shop Tomorrow Never Knows appears to have closed as well), while others remain (PolyEster Records, happily, is still going strong, though they've gotten rid of the neon Dobbshead that was on the wall, as is Dixon Recycled, and Bar Open is still hosting interesting gigs). Smith Street, once colloquially known as “Smack Street”, is reshaping itself as a playground for young people with disposable income, featuring, among other things, several video-game bars (including the arcade-machine bar Pixel Alley) and a burger joint housed inside the shell of an old Hitachi train on the roof of a building (the experience of being inside such a train and it being air-conditioned will be incongruous to those old enough to remember riding in them), not to mention some very nice-looking new flats nearby. There is a new generation of hipster/bro hybrids making Fitzroy their stomping ground. North Fitzroy is largely bourgeois and sterile; bands still play at the Pinnacle, but the Empress, once the crucible of the Fair Go 4 Live Music movement, is under new management and has replaced its bandroom with a beer garden; East Brunswick and Thornbury seem to be becoming more interesting, and Northcote is steadily gentrifying. There are blocks of luxury flats going up everywhere, though most of them have no more than three stories, either because of zoning requirements or perhaps to avoid scaring away buyers from Asia.

Melbourne feels increasingly connected to Asia. In particular, the CBD has become a destination for a combination of property buyers and students from Asia, from bubble-tea bars and a surfeit of Chinese and south-east Asian eateries aiming outside the westernised market to real-estate dealerships aiming at the Chinese market. While there are fewer Japanese migrants and students, the cultural and commercial influence of Japan has been increasing. Japanese food is everywhere; there are increasingly many establishments festooned with red lanterns and purporting to be izakayas, some of which are more authentic than others (Wabi Sabi on Smith St. was excellent), ramen restaurants are popping up, as are Japanese ice cream shops; and then, of course, is the several-decades-old Melburnian institution of takeaway sushi rolls, served in a paper bag with a piscule of soy sauce, as unpretentious fast food. Japanese retail is also making inroads; Uniqlo and Muji have opened shops in Melbourne and the T-shirt label Graniph have a small shop in the CBD. But perhaps most impressive is the Japanese take on the $2 shop, Daiso, a veritable Aladdin's cave of the useful and nifty, each item costing a flat $2.80. (European readers: imagine the Danish chain Tiger/TGR, only distinctly Japanese, with the scale and systemacity that implies.)

Some things remain the same. The trams keep trundling along, with minor route adjustments. The radio station 3RRR, now 40 years old, is going strong as an institution of the alternative Melbourne; an exhibition on its history just finished at the State Library of Victoria, and its stickers are ubiquitous, particularly in the inner north. The live music scene continues apace, in venues such as the Old Bar, Bar Open and the Northcote Social Club. (I saw three gigs in the latter: Lowtide, Pikelet and my favourite band from when I lived in Melbourne, Ninetynine, who are still going strong.) Street art remains an institution in Melbourne, a city where aerosol-art-festooned laneways swarm with tourists and wedding photo shoots and businesses hire “writers“ to decorate their walls with thematic pieces. And the arrival of H&M, in one oddly laid out shop occupying the former General Post Office, doesn't seem to have put Dangerfield out of business.

There are also signs of progress. 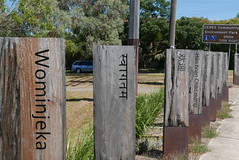 Reconciliation with Australia's indigenous population seems to be making tentative symbolic advances, with signs acknowledging the Wurundjeri as traditional owners, and the Wurundjeri word for welcome (“wominjeka”) appearing on signage. Solar panels are on roofs everywhere. 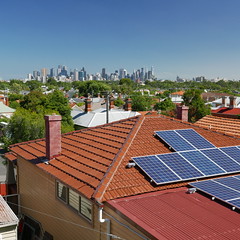 Cycling as transport seems to be increasingly popular, despite Victoria's mandatory helmet laws (which may have helped scuttle the city's Paris-style bike-rental scheme). And work is beginning on the state's first big public-transport project since the City Loop, the Metro Tunnel, a new underground rail route bringing Melbourne into the club of cities with a subway; currently, one side street near RMIT is largely boarded off to build a shaft for the tunnel boring machines, and both RMIT and Melbourne University are bracing for the hit to student numbers that three years of nearby disruptive works will pose.