In other news, today was the Australian federal election, and another Labor landslide that dissolved into thin air upon contact with reality, with a terminally unpopular conservative government romping home to a resounding victory. You can almost set your clock by them. 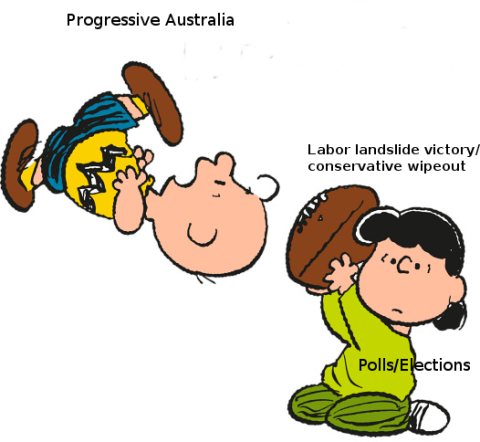 One can ask a lot of questions, and a lot of questions will be asked: were Labor too radical, alienating the Silent-Majority-Of-Suburban-Battlers who love their big cars and cheap coal-fired electricity and can't stand lefty ratbags from the inner city telling them how to live their life, or too timid, not giving Australian voters a Whitlam-scale vision of change to get behind? Was Labor leader Bill Shorten a terminal black hole of charisma? Did the traditionally left-leaning Fairfax papers' new ownership shift the balance? Did the conservatives cross the line by doing a preference deal with out-and-proud racists, or have they always been where they are? Was there ever a time when the quiet part was not said out loud? And so on.

One question that should be asked though is: why is it that, in Australian federal politics, the ALP is constantly poised for a barnstorming victory, except on the actual electoral night when it collapses like a sandcastle? At this stage, the pollsters, pundits, commentators and betting markets have successfully predicted the last four out of one ALP federal election victories. Is this just the ”shy-Tory” phenomenon, of everybody wanting to pose as a high-minded altruist whilst keeping their tax bill down and their negative gearing profits coming in? Is it something more culturally specific, perhaps the larrikin/wowser dynamic at the heart of the Australian psyche, an innate blokey conservatism coupled with a desire to watch their betters ritually sweat and squirm in the face of potential defeat? Are elections, and the Labor Party, little more than a sort of ritual psychodrama, a festival in which the King is put on trial by the court jester and everybody gets to let off a bit of steam before getting down to the next three years of no-nonsense conservative governance? (Repeat until climate change obliterates all life on Earth, unless of course climate change is Marxist propaganda.)

There are 1 comments on "Every three years, like clockwork":