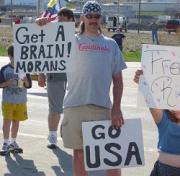 Foreign Policy (that's the Carnegie Endownment magazine, not the Illuminati Council on Foreign Relations one) has a set of articles on eight of the World's Most Dangerous Ideas, such as War on Evil, Transhumanism (by Francis "End of History" Fukuyama), Spreading Democracy (by Marxist academic Eric Hobsbawm), Religious Intolerance, and Anti-Americanism. (via FmH)

Film critic Lawrie Zion on the malaise afflicting recent Australian film; in particular, about recent films sticking to the theme of true-blue-dinky-di-Aussie-battlers vs. the evil forces of change:

What makes the recent Australian crop distinctive, however, is the way that even relatively sophisticated fare such as The Bank resorts to a one-dimensional character when it brings on its American villain. Accordingly, Anthony La Paglia, who gave us such a refreshingly understated performance in Lantana (2001), is reduced to a cardboard cut-out portrayal of slimy greed in The Bank. By contrast, the key American character in The Dish, played by Patrick Warburton, is given a chance to establish himself as a fully developed character, which not only provides the film with a less blinkered view of national "types", but also allows its "culture clash" moment to become something more interesting than a showdown between good and evil.

More troubling, still, with films such as Take Away is the way that Australians themselves are portrayed on the screen as naive and dim survivors of a laconic but cloistered culture that simply can't deal with change (though some might argue that this is a very accurate description of Australia in 2003).

Underdog motif or not, I can't recall having seen a recent Australian film where the characters weren't one-dimensional caricatures. More often than not, the actors (some of whom are footballers, comedians or both) ham up their performance, exaggerating the characters. Sometimes you even see them mugging at the camera after letting loose what they think is a devastatingly witty one-liner, as if giving the drongos in the audience the cue to laugh. It seems like so many Australian films are the bastard offspring of Hey Dad and the 10BA tax dodge.

Even in films which do not descend to this nadir, the film is usually slathered in Miracle Ingredient A, using its Australianness to sell an otherwise conventional story and one-dimensional characterisation to audiences looking for an alternative, however shoddy, to the McWorld monoculture from Hollywood. (Which is not unlike the plot of a recent Australian comedy, in fact, but I digress.) They don't see the films for quality, except in the "see, our sets/cinematography/special effects can be every bit as technically slick as American movies" sense, but for Australianness.

Which makes me wonder why Australia doesn't produce filmmakers like Canada (which gave us Vincenzo "Cypher" Natali and David Cronenberg) or Britain (too many to name). Surely it can't be a lack of talent. Perhaps the local market just doesn't encourage such innovation at anything above the Tropfest level?

Anti-US T-shirts seem to be all the rage in Canada, with Canadians eschewing peace signs for angrier statements, of the sort that might get one hospitalised south of the border.

Anti-war slogans seemed to be getting increasingly anti-American, with people going to everything from protests to the gym to trendy parties wearing tops that say Bush is a Terrorist or Twin Terrors above pictures of Bush and Osama Bin Laden.

Reaction in kind to FOXNews-style flag-waving triumphalism, or a futile passive-aggressive statement from a junior partner? How much do you want to bet that if US troops were to invade Canada (let's call it Operation Second Term), all those Canucks with "American Psycho" T-shirts would claim that they were just kidding?

"As far as clothing went, it was more about the peace symbol. Though you would see people sewing U.S. flags on the seat of their pants, so they'd always be sitting on it."

You know, one could probably make a killing selling shoes with American flag-patterned soles in the Middle East (where stepping on something is considered the most grievious insult).

Apparently US/French relations are rotten on both sides of the Atlantic: with a Times (i.e., Murdoch) poll showing that 1 in 3 French is barracking for Saddam, presumably just to spite the Freedom-Toast-eating conquest monkeys and the ancient Anglo-Saxon foe. Which is probably not too unlike in concept all those Scottish/Welsh/Irish football fans who support "whoever's playing against England". (via MeFi)

Brand USA has a hell of an image problem, it seems; it's not just al-Qaeda who hate what America stands for these days. Now American tourists in Europe and other places are finding themselves the targets of abuse over their government's unilateralist policies and thirst for war and/or their compatriots' penchant for oversized cars. The abuse ranges from people spitting at them and calling their names to being interrogated by taxi drivers about "America's megalomania". Something else to thank the President for.

But one incident really stung. "Man, it was bad," says the Rat Pack-y star of Swingers. "These girls saw us and were kind of flirting, and they kept asking us if we were American. Finally we said, 'Yes,' and they just took off. "One girl turns and says, 'We were hoping you were Canadian.' Canadian? Since when was it cooler to be Canadian?"

(Mind you, it could be argued that that is a small price to pay for your nation being feared and respected across the world; at least until China takes over as the dominant superpower, and follows in America's unilateralist footsteps. If you want a good future for your kids, make sure they can speak Mandarin.)

Meanwhile, Americans abroad are advised to blend in, avoiding fast-food restaurants, clothing bearing the US flag or sports team logos and discussion of politics. To which one might add learning to say "I'm Canadian" in many different languages. (via Reenhead)

A piece on anti-American sentiment across the world. Another one? Yes, but this one is in BusinessWeek, a publication I doubt is known for its bleeding-heart politics.