The recent Cat And Girl is an apposite comment on reactions to the death of the People's Prince of Pop:

The writer L.P. Hartley once stated that the past is a foreign country where they do things differently. Today's Cat And Girl revises this, arguing that, in the age of globalisation, instantaneous communication and accelerating change, our past is more foreign to our present selves than actual foreign countries are.

Remember the Cat And Girl "Indie Rock Is A Dead Language" T-shirt that was on sale a while ago, and then disappeared without a trace? Well, it has been reprinted, though is available only for a short time, so if you want one, you'll have to hurry.

There's a rather nifty-looking T-shirt coming out soon from Cat And Girl:

And then there's the Nippon Whale T-shirt.

This past week's Cat and Girl were rather good; starting off with sandwiches as metaphors, and culminating in a sandwich interpreted as a villanelle: 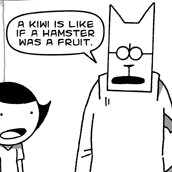 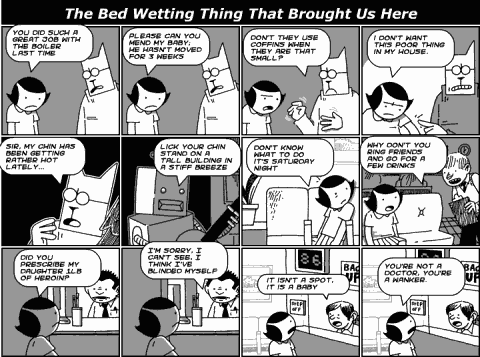 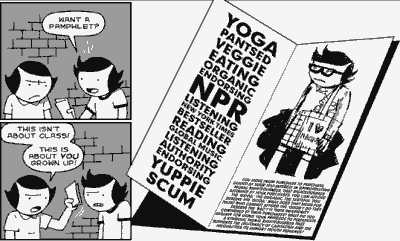 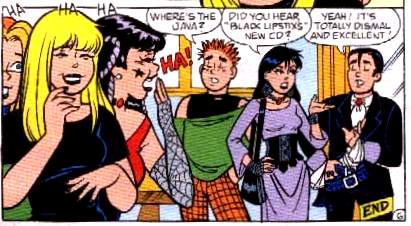 Today's Cat and Girl is a good one; it extrapolates Happy Days and That 70s Show into a prediction of 1990s retro: 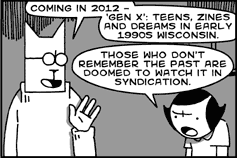 Come to think of it, a sitcom about slacker/hipster ironist zine kids in the 1990s could probably work. (I imagine there's laugh-track material to be extracted from anachronisms like the characters not having LiveJournals or blogs and relying on photocopied zines to get their thoughts out, having to take film to be developed, and so on; there could also be product-placement opportunities for FedEx/Kinko's or such.) It'd probably end up looking like a more polished version of Clerks or various low-budget American indie films that followed.

Today's Cat and Girl ties in nicely to the chip-tune/authenticity debate previously mentioned:

"Guitars are bourgeois, OK? They're expensive and the skill they demand is elitist!"

"We should be making music with computers! They're the populist medium of today!"

Mind you, computers are bourgeois and expensive too; the iBooks that all the inner city hipster kids have certainly are. Though maybe it's more authentic if you shlep along a battered beige box that looks like it was stolen out of an office and souped up numerous times, running Windows 98 and AudioMulch (or better: Linux and some home-brewed audio software; it's not going to sound as slick as Cubase, but slickness is bourgeois). Having to lug that and a 15" glass bottle to see what's going on bespeaks punk authenticity and commitment to one's art, in a way you can never get with an Apple PowerBook.

(Of course, there's no way you could carry a PC/monitor to gigs on a bicycle. Then again, real proles drive, usually battered Mazdas or Holden panelvans. Cycling everywhere is a bourgeois affectation, like vegetarianism. Discuss.)

(Btw, Graham: any ideas on how one could combine tracker modules and live performance? Perhaps a tracker with keyboard-controlled mutes/cuepoints/sample triggers could be useful for that...)

This week's Cat and Girl is quite amusing.

For those who missed out on the Chat et Fille T-shirt, there's a new Icelandic Cat and Girl T-shirt; perfect for wearing to Sigur Rós gigs and the like. I'm tempted to get one, even though my credit card has seen much better days.

Heh; I just found this early Ninetynine gig flyer in the Cat and Girl reader-contributions section. Actually, there is an uncanny similarity there...

Btw, the new Chat et Fille T-shirt they have looks pretty doovy, in a Belle-et-Sebastien sort of way.

An interview with Dorothy Gambrell, who draws Cat and Girl and The Four Fours.

DG: Are the proletariat cool? Or is talking about the proletariat cool? I'm interested in culture, in society I have generally found that politics are not nearly as important as politicians claim they are. Unless, of course, Politics starts running around the room waving its arms and shouting incoherently, as it's been doing lately. I haven't considered myself political in the past, but I can see people around me becoming much more political. I wouldn't be surprised to soon find myself among them.

What does bother me are trends disguised as inevitabilities like, say, marriage, or having a full time job. There are lots of excellent reasons to have a full-time job money and stability and getting out of the house - and there are lots of good reasons to not have a full time job - like owning your own time. If you choose to make that trade off, between stability and time, time and money, that's fine, but I do feel that a lot of people never realize that there was a choice to be made.

Incidentally, there won't be any new issues of Cat and Girl for a few weeks, because Dorothy has gone to Australia, of all places.

Things I found in my PO box today:

This week's Cat and Girl is a particularly good one. As they say: it's funny because it's true.

For the style-conscious indiekid: Cat and Girl, one of the better web comics, now have some rather twee-looking button badges. Wearing suggestion: on fur-lined parka with black-frame emo glasses, to flaunt your subcultural awareness.

Cat and Girl are back; and this week's one is quite good, dissecting indiekid/emo/hipster fashion/symbolism.

Web comic of the day: Cat And Girl, which is what it sounds like. Cuter than Pokey the Penguin, and no less philosophical. (via Lukelog)