I just found out that there is an entire blog devoted to Commodore 64 music; and it seems to be surprisingly busy too. Some of the things on it include C64 music nights (and there's one in Manchester this weekend; had I known about it sooner...), new music software which manages to squeeze ever more out of the C64 hardware, homebrewed MIDI interfaces, C64s grotesquely hacked into rack-mounted synths, instructions on making one's own cartridges, ways of using quirks of the C64 hardware to make sound, people selling C64 game ringtones, and links to creative projects like Casionova, an 8-bit Kraftwerk covers compilation and more.

Not to mention a Commodore-branded entry onto the media player market, which doesn't actually play C64 software or chiptunes. You'd think that whoever owns the brand would have done more than commissioning a generic media player and slapping the chickenhead logo onto it. I wonder if it's of any better quality than the "Commodore" DVD+Rs I bought last year, which burned perfectly well but failed to read afterward.

Tulip BV, the Dutch company which owned the Commodore brand and slapped it on dodgy DVD+Rs and VIC-20-brand MP3 players, has sold the brand to a company based in Beverly Hills, the cringeworthily-named Yeahronimo Media Ventures, who currently are in the business of hawking ringtones or somesuch. Apparently their business model involves cracking down on "copyright infringement" of the Commodore name (whatever that means), and or replacing their own less than ideal name with Commodore.

If you pass a computer shop and see a package of blank DVDs bearing the Commodore chicken-head logo, retro hipsters, think twice about buying them.

I recently bought a spindle of 10 Commodore DVD+Rs (for £6), only to find out that they don't work with my DVD burner (a Pioneer DVR-107D). Well, they half work; it can write them perfectly well, just that it can't read anything off them afterwards, and nor can my iBook. (Oddly enough, the Pioneer drive has no problems with other DVD+R media, including Verbatim.)

So now I have a spindle of 8 unused Commodore-brand DVD+Rs which are of no use whatsoever to me. 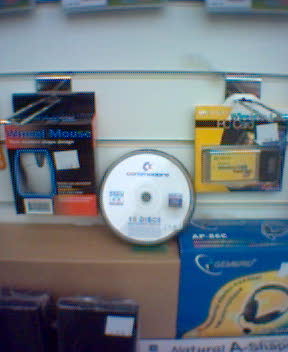 Tulip Computers, the Dutch company which bought the Commodore brandname, are making moves to capitalise on their brand, with portable MP3 players. The Commodore e-VIC-20 (cringe) is a 20Gb hard disk-based MP3 player/recorded, which looks not too unlike the Archos Jukebox Recorder in specs. (It's also a USB Mass Storage device, and so apparently isn't locked into what its maker considers to be good enough management software for the user, unlike some other MP3 players.) The venerable Commodore Pet line has also been reincarnated as a range of USB Flash drives and Flash-based MP3 players.

But wait, there's more! On their website, Tulip promise more to come. They have big plans for the Commodore 64 brand, with new products, both based on old C64 technologies and "new, innovative products fitting perfectly with the C64 image". (Does this mean Commodore 64-brand Windows XP notebooks or something? Maybe they'll even ship it with a dark-and-light-blue Windows XP colour theme, giving the user more of the Commodore 64 experience.) On the way is a joystick-shaped device that plugs into a TV and contains 30 C64 games built in.

Elsewhere, they promise "all sorts of merchandising available like t-shirts, caps, sweaters and lots of gadgets". I imagine rooms full of 8-year-olds somewhere in South-East Asia, busily sewing Commodore 64 trucker caps as we speak.

Also, according to the copyright notice, the official name for the Commodore logo is the "chicken head logo".