As one of his final official acts, US President Obama has commuted the prison sentence of Chelsea Manning, the former intelligence analyst who leaked classified video of drone pilots massacring civilians, to time served. Now all that Manning has to do is survive the next four months in prison under the total control of a fundamentally hostile administration and she'll be free. The usual hawks are apoplectic.

Of course, we have the selfless Julian Assange to thank for this; were it not for his pledge to surrender to extradition to the US in exchange for clemency for Manning, this may or may not have happened. Though now, Assange seems to be backing away from his commitments, saying that Obama's offer of clemency does not meet the conditions of his offer, in that Manning will not be released immediately. Perhaps he'll surrender in May, when Manning is scheduled to walk free; in which case, his sentence may be to play Robin to Rudolph Giuliani's Batman in the Trump administration's Department of Cyber; the job may involve taking orders from an 11-year-old “special advisor”.

Pointedly left out of any option of clemency is, of course, Edward Snowden, the NSA leaker/hero-and/or-traitor currently holed up in Moscow. Russia has apparently extended his visa for another three years, though that could well be a feint, and he could be in restraints on a light plane to the US as an inauguration present. If he is convicted and the timings of the Julius and Ethel Rosenberg case are anything to go by, he would be likely to be executed in 2020, as the monster-truck-rally spectacle of Trump's second-term campaign cranks up, and as much heat and noise as possible is called for. Assange may find himself guest of honour at Snowden's execution, an invitation without the option of refusal, whose purpose will be to underscore the fact that he is not relieved of his obligations to his handlers, and that bad things happen to you if you cross Trump/Putin. (Later, rumours will emerge that the firing squad was ordered to aim at the wrong side of Snowden's chest, a death traditionally reserved for particularly unpopular deposed dictators in Latin America.) 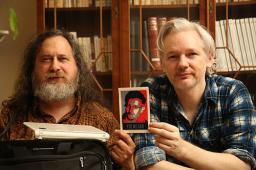