Melbourne new-wave revivalists Snap! Crakk! have announced that they are breaking up. They were like a more electrocoolsie Vivian Girls or something.

And continuing the strange-music theme recently dominating this blog: someone's putting together theme recently dominating this blog: someone's doing an elektro tribute to Iron Maiden. By the look of the page, I'd guess that their definition of "elektro" would be the sort of sternly Teutonic industriogothic EBM that grew out of youths in depressed German industrial cities playing with Amigas a decade or two ago. It could be amusing, or it could be dourly monotonous, or some combination thereof.

I just picked up the new Chicks on Speed album, 99c. It's amusing; a bit of a punk DIY aesthetic going on, with them ranting about consumerism, culture-jamming and selling out over electronic beats and sampling mobile phone ringtones and such. (I'm not sure where it falls in the ProTools<->chip music spectrum, though; bits of it have a computer-produced gloss about it, but then they're chopped up and distorted. Fake authenticity or détournement? Someone could probably do a PhD thesis on the subject.)

The booklet is a "catalogue" of Chicks on Speed merchandise, including an "urban camouflage" T-shirt printed with a lot of brand names and corporate logos. None of the items have prices, except for a coffee-table book selling for £59.95/US$85. (Somehow, I don't think I'll buy a copy.)

The CD also contains a Quicktime video for We Don't Play Guitars, which is somewhat amusing, and features Peaches as a Joan Jett-esque retro hard-rock goddess.

This site has (alongside numerous bootleg mixes of top-40 pop tracks) a rather amusing electroclash version of Smells Like Teen Spirit, by someone calling themself Dsico. (The hand-coded JavaScript scrollbar's a bit silly though.) (via Graham)

This evening I crossed the Yarra and went to Revolver to see Kevin Blechdom and supports; meeting up with Cos there. First up was the obligatory DJ (given that it's in Prahran, I believe there are council zoning requirements mandating DJs in all venues there), playing various electro, including some new Death In Vegas, some Takako Minekawa, a Kraftwerk remix and such.

Next up, local Dadaistic hip-hop collective Curse ov Dialect went up, attired in various costumes (as in robes, face paint and a jester hat; no gangsta bling-bling here), running around the stage, rapping and talking over prerecorded beats, in between running into the audience and grabbing glasses off tables. They were quite good; conceptually more original and innovative than most Australian hip-hop (which tends to consist of knockoffs of Afro-American urban culture, down to the beats and samples, with the token Australian accent and slang terms thrown in).

Next up were The Sailors, who appear to be three post-ironic inner-city hipsters doing Detroit-style rock (with a bit of Beastie Boys thrown in for good measure); either that or one of those New-Saviours-of-Rock bands whose names all start with The. Stylistically not in the same bag as Kevin Blechdom, but similarly fond of innuendo (only of a more homoerotic nature, cf. their Stooges-style opus "Y.C.M.A.", which has nothing to do with the Village People). Perhaps one could classify them as an indie-rock Down Town Brown.

Finally, Kevin Blechdom came on. (For those who aren't aware of this, she is female, and Kevin is not her real name.) She started off by playing banjo, solo or over loops from a Macintosh laptop behind her.

Later she picked up a home-computer MIDI keyboard (adapted into stage gear by the clever expedient of gluing a strap onto it) and started playing that, triggering some Casio-like buzzy warbles whilst singing. She finished with her exquisitely bootywhangular chair-dance to her electropop cover of Tina Turner's Private Dancer, at one stage falling off the chair but soldiering on. Alas, my digital camera ran out of batteries at the time; had it not, I'd have a video file to show for it.

I'm not sure what to make of Kevin Blechdom. On one hand, some of her lyrics are a bit daft (some choice examples: "use your heart as a telephone, and you'll never ever be alone, you see, you'll be with me", "I don't think you understand, bad music is grand -- like a piano!", and a song about breasts exploding in flames which had a schoolyardish puerility about it), and she overacts more than a little, giving the impression of watching an enthusiastic amateur in a talent show. Though judging by her content, I suspect that that may be a deliberate aesthetic choice. OTOH, she's more entertaining than watching some bloke making burbling noises with a PowerBook, or the sort of dull, pretentious twaddle that makes up a lot of "experimental electronica".

Apparently the new Fischerspooner album is getting a local release; I may have to check it out. Bec Hornsby just played a track from it on her programme on 3RRR; it's much as I expected, stilted synthpop-inspired beats. I get the impression of them being to the 80s what the mid-90s Britpop movement were to the 60s, or perhaps Air to the '70s; not so much a slavish imitation as a reinterpretation and an updating. (Or perhaps an appropriation or opportunistic plundering.)

(Which makes one wonder what the '90s-inspired artists in a decade's time will be like. Grunge revivalists, perhaps, or 'old-style' commercial techno-pop with 909s and 303s in the mix; only done as an ironic reference, with a 'teens sensibility?) 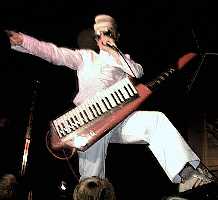 Tonight I went to see Down Town Brown's show, The Future of Rock'n'Roll in the comedy festival. It was quite entertaining, as DtB shows usually are. It didn't differ much from a regular DtB show, save for some interludes, some extra costume changes, and the emergence of the anti-DtB, three highly dodgy geezers with suspenders and bad haircuts/teeth who wowed the audience with a harmonica/guitar/washboard performance and some enthusiastically daggy tap dancing. Anyway, Down Town Brown said that they're extending their season for an extra week (i.e., next Thursday to Saturday), so if you missed them, you can catch them then. 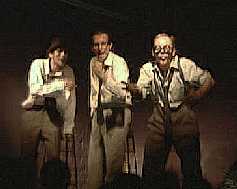 (And it's about time someone brought back the washboard as a deliberately daggy musical instrument, used more for its ironically self-deprecating semiotics than its expressive qualities. Perhaps that would make it a more rootsy/alt-country answer to the Casio keyboard...)

Just heard Bis's cover of Love Will Tear Us Apart; it's pretty amusing, in a 80s-retro-kitsch sort of way. They use a speech synthesiser to do part of the vocals.