From an article by Nick Cohen about the current Frieze art fair in London, an observation on the function that huge, tacky-looking artworks fulfil in validating their wealthy purchasers' status; Cohen's argument is that monumental kitsch is a peacock-tail-like mechanism for (expensively and unforgeably) demonstrating that one has status putting one beyond the criticism of one's inferiors:

The justifications from the critics whom galleries always seem able to find to dignify the shallow add to the melancholy spectacle. They talk of challenging our notions of what is art as Duchamp did with his urinal. They forget that Duchamp offered his "fountain" to a New York show in 1917 – almost a century ago, and his once radical ideas are now so established they will soon deserve a telegram from the Queen. "Everything changes except the avant garde," said Paul Valéry. Yet Frieze shows one change, although not a change for the better.

Collectors do not buy Koons because he challenges their definitions of art. The ever-popular explanation that the nouveau riche have no taste strikes me as equally false – there's no reason why the nouveau riche should have better or worse taste than anyone else.

What a buyer of a giant kitten or a gargantuan fried egg says to those who view his purchase is this: "I know you think that I am a stupid rich man who has wasted a fortune on trash. But because I am rich you won't say so and your silence is the best sign I have of my status. I can be wasteful and crass and ridiculous and you dare not confront me, whatever I do."

In his most recent column, Charlie Brooker suggests a few things to give up for the New Year, among them, variants on "Keep Calm And Carry On" and cupcakes:

Of all the irritating "Keep Calm" bastardisations, the most irritating of all is the one that reads "Keep Calm and Eat a Cupcake". Cupcakes used to be known as fairy cakes, until something happened a few years ago. I don't know what the thing was, because I wasn't paying attention. All I know is that suddenly middle-class tosspoles everywhere were holding artisan cupcakes aloft and looking at them and pointing and making cooing sounds and going on and bloody on about how much they loved them. I wouldn't mind, but cupcakes are bullshit. And everyone knows it. A cupcake is just a muffin with clown puke topping. And once you've got through the clown puke there's nothing but a fistful of quotidian sponge nestling in a depressing, soggy "cup" that feels like a pair of paper knickers a fat man has been sitting in throughout a long, hot coach journey between two disappointing market towns. Actual slices of cake are infinitely superior, as are moist chocolate brownies, warm chocolate-chip cookies and virtually any other dessert you can think of. Cupcakes are for people who can't handle reality.

[Miranda July] is to cinema as the contemporary cupcake is to carbohydrate. This is to say, she is fantastically decorative and easy to consume but ultimately delivers naught but empty calories in a gaudy blast of sugar. In her non-narrative narratives about mildly depressed shoe salesmen and people who babysit slightly injured cats, she hints at depths that do not exist. This, of course, is not a transgression we could attribute to the cupcake. But July's perplexing popularity, just like the cupcake's, is founded on the overuse of whimsy.

The popular actress and singer Zooey Deschanel had elective surgery that saw her brain and taste replaced with a clockwork mouse. Michael Cera, insufferable star of the insufferably whimsical Juno, works to a similar mechanic and if I see one more knitted effing toy at a gallery, I may take a needle and hurt the next ''craft practitioner'' foolish enough to offer me a cupcake. As for burlesque. Well. If I had my way, ''whimsical'' disrobing would by now be a summary offence.

Razer places the blame on Jeff Koons, the yuppie banker who parlayed his skillset into becoming the founding artist of the Capitalist Hyperrealist movement, predicated on an infinitely shiny, infinitesimally superficial lack of deeper meaning, and in doing so, brought whimsy into the mainstream.

It is difficult to pinpoint the moment when whimsy escaped from the birthday parties of six-year-old girls and into the business of serious art. We might suppose that this was in the same moment intelligent women stole cupcakes from their daughters. I personally place the shift at about 10 years ago when I noticed a large dog sitting by Circular Quay.

There are many things to loathe about Jeff Koons. Much of his work is a triumph of money and plastic. Even when he does not work in plastic, he seems, somehow, to be hygienically safeguarded against any infection by meaning. This, to me, is his gravest offence and the primary impact of his stupid sculpture Puppy.

Which suggests that the kooky, twee whimsy that infects White-People consumer culture is itself a necessary consequence of the rise of postmodernism. The question is: what mechanism leads from A (the state in which it is a truth universally acknowledged that Everything Is A Market and that nothing has any intrinsic meaning deeper than the price that the market will bear for it) to B (the ascendance of cupcakes, polka dots and Manic Pixie Dream Girls with ukuleles to cultural universality).

But from a British point of view, don't you feel thrilled that the most outrageous artist in the world, the most hated and reviled, is from these shores? I mean, we used to be crippled by good taste – or rather, people saw us that way. How did it come about that a British artist outdid Andy Warhol as a businessman and Jeff Koons as a master of kitsch? It is surely a national triumph.

Something happened in Britain in the 1980s and 90s that tore up the national rule book – in politics, economics and art. Hirst, whatever your feelings about him, is a symbol of that time of change. And like it or not, at a time when we wonder what is coming next, he flies the flag for a provocative and electrifying world image of Britain. Just like Thatcher did.

One could make a case that Damien Hirst's art is to Thatcherism-Blairism what Rodchenko's constructivism was to the young USSR and banners of heroic peasants waving red flags were to Maoism; it was the house style of an ideology, in this case one combining the naked free market of Thatcherism with the feel-good spin of Blairism.

Jeff Koons Must Die!!! is a new art installation by multimedia artist Hunter Jonakin. It consists of a video arcade cabinet running a first-person shooter game involving the eponymous artist and his works: 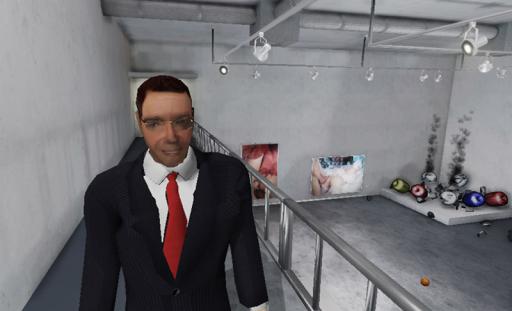 The game is set in a large museum during a Jeff Koons retrospective. The viewer is given a rocket launcher and the choice to destroy any of the work displayed in the gallery. If nothing is destroyed the player is allowed to look around for a couple of minutes and then the game ends. However, if one or more pieces are destroyed, an animated model of Jeff Koons walks out and chastises the viewer for annihilating his art. He then sends guards to kill the player. If the player survives this round then he or she is afforded the ability to enter a room where waves of curators, lawyers, assistants, and guards spawn until the player is dead. In the end, the game is unwinnable, and acts as a comment on the fine art studio system, museum culture, art and commerce, hierarchical power structures, and the destructive tendencies of gallery goers, to name a few.