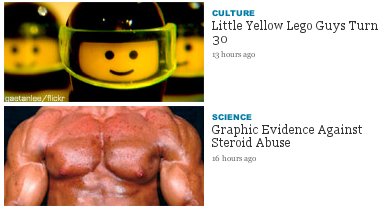 BusinessWeek has an interesting slideshow of how LEGO bricks are made, along with an article on LEGO.

Fact of the day: LEGO is the world's #1 tyre manufacturer, by quantity (if you count LEGO-model-sized tyres).

Escher's Belvedere in Lego(tm); that's the one with the monks on the infinitely ascending/descending staircase (and yes, it is physically impossible; still, it didn't stop these people from doing it). (ta, Peter!)

When Lego released its programmable Mindstorms kits, they were reverse-engineered pretty quickly by hackers dissatisfied with their limitations. Rather than send in the lawyers, Lego's policy was to condone this. As a result, the Mindstorms kits have sold like hotcakes as hackers have taken to them.