Pitchfork has an interesting roundup of the music scenes in West Africa today; these have little to do with the "Afrobeat" that is a hipster touchstone in the West, which is ancient history over there:

The picture is so selective, actually, that many of my West African acquaintances might not recognize most of the music their country sells on the world stage. To take one example, Ghana's most famous musical export r emains highlife, a calypso- and jazz-influenced concoction birthed in the 50s by big bands like E.T. Mensah and the Tempos. Today, E.T. and his contemporaries are rarely played, performed, or discussed in public in Ghana; highlife tête (old/classic highlife) instead refers to mid-80s drum machine funk stars like Daddy Lumba and Kojo Antwi, artists who crooned like Luther Vandross over ultra-slick productions.

Music in West Africa has moved at a rapid pace, fuelled by a baby boom eclipsing that experienced by America and Europe in the 1950s, and the availability of both high-end and low-end music-production technology (apparently Fruity Loops is huge over there). Of course, there's a panoply of scenes there, with different countries having their own scenes, and some scenes owing more to American or Caribbean music than others.

Ivoirian rhythms are so twitchy that crunk would have come like a tranquilizer on this dance-hungry, hyper-rhythmic nation. Some of the planet's best dancehalls and worst roadblocks are here, a testament to two of the country's nighttime priorities: clubbing and government extortion. The capital's CD shops are stocked with charismatic mic-hogs, loudmouths, and humor-mongers belting out tragic stories in the soothing tone of a drill sergeant. Military lockdown no doubt changed the way Ivoirians flow, the way their snare drums patter, the way their dance moves shake like the heebie-jeebies (e.g., the Bird Flu dance of 2006). This is post-traumatic stress rap. The explosive urban strain, the boastful comedy, and the displacement are all familiar. So too is the obsession with wealth and wealthier places that gave the genre its name: "Coupe Decale". In the Ivoirian French, it means to steal and run; to go out and explore the world, swipe a Parisian's pocketbook, then dash back to Abidjan.

And then there's the complex matter of the "Ghana Rap" contingent, the chunk that wants to be accepted as rappers-- members of the Black American experience-- first and Ghanaians second... It's tempting to write these guys off as social misfits-- bright minds in a struggling, post-colonial nation to compete for membership in a contest that doesn't even acknowledge their existence-- when they spend time channeling rap to imagine themselves as part of an American underworld they know little about. But there's plenty in it for their audience, too: There's something invigorating about hearing one's globally devalued local tongue voiced over a hip-hop beat, a real hip-hop beat with unpolished synth squeals, a reverberated handclap.

Perhaps because they don't deal with such a tiny, cash-strapped market, the Nigerian artists tend to be more confident, more refined, and more likely to cross the sea. Although the nation could do without more tired Internet fraud associations, I recommend most heartily Olu Maintain's "Yahooze"-- a single about scamming suckers online and wasting the money on Hennessey. More slick and more serious is Storm Records, whose roster has largely managed the nimble knack of mastering American idioms without being tripped up by the specifics (check out Naeto C, "Kini Big Deal", Ikechukwu, "Shobedobedoo"). These are the sorts of hits that don't demand the same kind of sociological preface that an Asem record calls for, and they could more easily travel.

The article includes a lot of embedded audio streams with examples of the songs mentioned.

It looks like the latest angle in 419 ("Nigerian") scams is not millions of dollars of oil revenues or Iraqi gold but free puppies, as evidenced by the following email:

MY NAME IS Rev. Sis Dora Martins, I AND MY HUSBAND ARE ON A CHRISTIAN MISSION TO AFRICA AND I CAME ALONG WITH MY PUPPY. AFTER A WHILE I NOTICE THAT THE AFRICAN WEATHER IS NOT GOOD FOR THE PUPPY AND I HAVE NOT BEEN ABLE TO TAKE GOOD CARE OF HER THE WAY I ALWAYS DO BECAUSE OF MY JOB. I NEED SOMEONE TO ADOPT HER AND TAKE CARE OF HER THE WAY I ALWAYS DO. IF YOU CAN TAKE GOOD CARE OF HER DO SEND A REPLY AND I WILL EMAIL YOU HER PICTURES. I HOPE TO READ FROM YOU. THANKS AND GOD BLESS.
Rev.Sis Dora.

Another way to string along Nigerian email scammers for laughs: baffle them with babble, as sketch comedy group Kaspar Hauser did, and see how long you can keep them trying to figure it out:

Where are you?! I have tried calling for two days! I have the Swift code for Land Bank/Kangaroo Millionaire Donor Fund (is it safe to e-mail?). I first thought there was a thumb protector on my phone but now I'm worried that I'm missing some sort of Nigerian hand mask: must I dial a country code first?

I WILL NOT BE MADE THE PONY BOY: IXNAY! If this is a scam, I want to know about it. I'm here to help Nigeria.

God Bless Me and You Both,
J. Plenary, CEO

P.S. Sorry if I seem irritated, but a horribleness has befelsterred my children's academy: Phyllis the Boy fell into a bottling machine, and I am busy, Mr. Shaish...busy with a capital Jesus.

Could this be the greatest ever prank played on a 419 scammer? The prankster, who received the usual proposition to help in the transfer of vast sums of money from Africa, posed as art dealer "Derek Trotter" and convinced the scammer or an accomplice to produce incredibly detailed wood carvings of a Creature Comforts figurine and a Commodore 64: 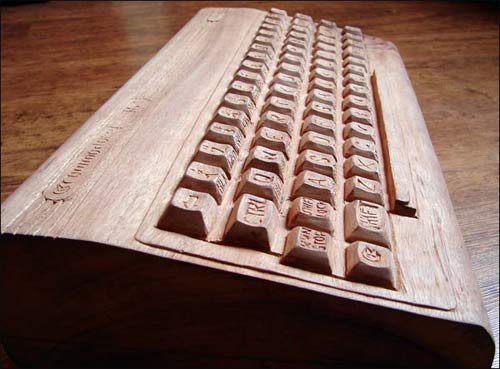 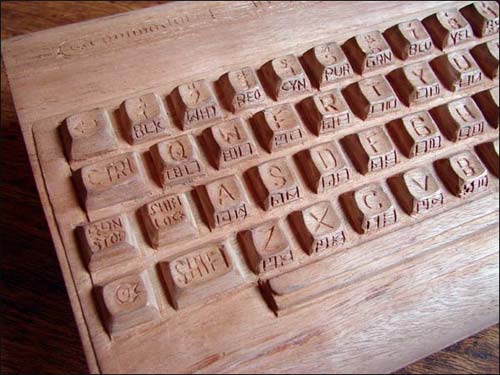 One woman takes a Nigerian mail scammer for a ride. (via bOING bOING)

Buddy Weiserman vs. Prince Jubril Turey of Sierra Leone; or the story of how an anonymous prankster took a Nigerian 419 scammer for a ride (persuading him to catch a bus across Africa and chicken-dance in Ghana in the hope of snaring his mark). (via bOING bOING)