And now, a chap in an orange puffer jacket and plastic electro shades who goes by the name "Jetdaisuke" will demonstrate how to make a talkbox using only a Nintendo DS, a copy of Korg DS-10 and an ordinary drinking straw. It's in Japanese (with a few recognisable words like "sturo", "talkbox talking modulator" and "daftapunk"), but easy enough to follow from the video alone.

glitchDS is a suite of (somewhat unconventional) homebrewed Nintendo DS music programs. They include CellsDS, a grid-based sequencer apparently modelled on the Tenori-On, only extensible using Lua scripts, as well as a gesture-based sample player named repeaterDS and the eponymous glitchDS, a music toy based on Conway's Game Of Life. Of course, you will need a homebrew card to use these, which may be illegal or otherwise difficult to acquire in some territories. 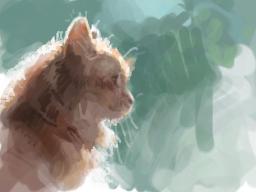 Japanese synth manufacturer Korg have announced a Nintendo DS emulation of their MS-10 semi-modular synth. (They're those small L-shaped ones with the patch cords you sometimes see at gigs.) The Korg DS-10 is being developed by AQ Interactive, and will be released in July 2008, though only in Japan. From the screenshots, it appears to be labelled in English, so ¥4,800 could get you a usable copy.

When George W. Bush, Leader of the Free World, turned 60, Nintendo gave him a DS and a copy of Brain Age. The jokes write themselves.

The Nintendo DS, sometimes dismissed as the Sony PSP's poor cousin, is starting to look like an interesting platform. For one, whilst Sony's unit is largely dominated by fairly conservative mainstream fare like driving/sports/gang-warfare/first-person-shooter games, the dinky DS, which lacks the raw power to compete in the graphics-machismo stakes but has two screens, one of them touch-sensitive, and a microphone, has been capitalising on this with more conceptual and experimental titles. One which has been raved about recently is Electroplankton, an artificial-life-based algorithmic-music-composition game/toy/tool developed by Japanese multimedia artist Toshio Iwai. Electroplankton was apparently the most popular Japanese import to the US, though now has been released there, and at least one musician has made an album using it, and is using it in live performances.

On a more practical note, the Opera web browser is about to be released for the DS; Opera will be a cartridge which allows users to browse the web via Wi-Fi from their DS. I wonder how long until Skype or someone release a VOIP cartridge, turning the DS into an internet telephony handset.

Meanwhile, some hobbyist hackers have written a personal organiser package for the DS. It's a download, and needs some hacking to get it to work. And someone else is manufacturing and selling cartridges for running homebrew software on a DS. The PassMe cartridges plug into the cartridge port and take a legitimate game cartridge, which they use for authenticating the code downloaded onto them as legitimate; they are used for running homebrew titles, and absolutely not, it must be stressed, p1r4t3d games. It's not quite clear how one downloads the software image onto the cartridge, though; I imagine it may use proprietary software, possibly running only on Windows.

A game developer in Montréal has developed a video game to teach techniques of female sexual gratification. It involves stroking a cartoon rabbit named Lapis, whose response to the stroking is modelled on female sexual response:

The prototype teaches how to reach orgasm by simulating the affect of pleasurable sensation on the cartoon. Players tickle, touch, tap, and stroke Lapis using the touch screen of the Nintendo DS, a hand-held video game device. They can also talk, sing and blow on the bunny's fur using the device's built-in microphone.

The more they stimulate the bunny, the happier he becomes until eventually he begins flying through the air. But Lapis is also an unpredictable creature who needs a variety of sensations. Sometimes, no amount of stimulation is going to work.

Heather Kelley's page on her prototype game is here, and includes a presentation and a (Windows-only) downloadable prototype demo. Lapis itself was developed for the Nintendo DS, and thus may not ever make it out the door, assuming that Nintendo have to sign off on each title published for the DS and they are as censorious about game content as they were during the NES Maniac Mansion days.

I imagine one could do some fairly nifty things with the Nintendo DS hardware if one cracked it open enough to do so; it has two ARM CPUs and built-in WiFi networking (albeit, natively, it runs a weird proprietary protocol on top of that). And that goes doubly so for the new PlayStation Portable.