A few controversies from the 8-bit music world: claims that electro outfit Crystal Castles ripped off the work of various chipmusic artists, violating the terms of their Creative Commons licence (though this Pitchfork article clarifies this, stating that the tracks in question were never actually released). Meanwhile, this documentary puts forward the theory that Michael Jackson (yes, that Michael Jackson) wrote the music for Sega's Sonic 3 video game on the MegaDrive/Genesis. 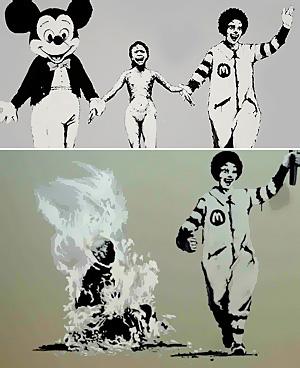 It has emerged that L. Ron Hubbard may have lifted parts of Scientology (or at least its title) from a 1934 text. Scientologie: Wissenschaft von der Beschaffenheit und der Tauglichkeit des Wissens ("Science of the Constitution and Usefulness of Knowledge and Knowing"), written by a Dr. A Nordenholz in 1934. Alas, Dr. Nordenholz didn't have the vision to start a religion or establish celebrity centres, and thus vanished into obscurity.

Bubblegum pop producer Pete Waterman (of Stock-Aitken- fame) has revealed that he lifted the structures of many of his songs from classical compositions. Kylie Minogue's I Should Be So Lucky is apparently based on Pachelbel's Canon in D, and Dead Or Alive's You Spin Me Round (Like A Record) borrows from Wagner's Ride of the Valkyries, one of about 20 times Waterman has copied from Wagner. (I presume he refers to chord progressions and harmonies.) Waterman also has the extraordinary temerity to compare himself to The Beatles and Burt Bacharach.

And while we've brought up Kylie Minogue, the ubiquitous pop star has recently described herself as a drag queen caught in a woman's body. Funny; I once said almost the same thing about her.