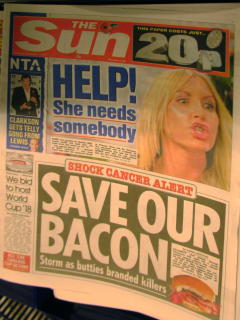 Apparently, next week is National Singles Week, an event to highlight the growing proportion of the population that is uncoupled, dispel myths about all singletons being desperately unhappy, and push for the government to reform laws that penalise people for being single. (Note: this is the British government; the Australian government firmly believes in the absolute supremacy of the nuclear family and is as likely to look favourably on alternatives as it is to sign the Kyoto protocol or start inviting controversial art-house filmmakers to screen their wares on its relaxed and comfortable shores.)

About 48 per cent of the adult population is now single, and by 2010 more than 40 per cent of households are expected to be occupied by single people.

(Is this one-person households? Being uncoupled I can understand, though I can't imagine 40% of households in Britain being occupied by people who can afford to live alone. Not unless they redefine bedrooms as separate households or somesuch.)

The survey, timed to coincide with National Singles Week, which begins on Monday, found that 82 per cent of those questioned said that being single gave them "an opportunity to try new life experiences" and 89 per cent said that travelling alone "boosted their confidence" and allowed them to be more spontaneous and adventurous.

"There are disadvantages to being single. Apart from some financial ones, there are social ones as some couples think of single people as predatory and many older single people are lonely," Ms Knowles said.