I just read Christopher Brookmyre's most recently published novel, A Tale Etched In Blood And Hard Black Pencil. It took me a while to get around to it, because I found his previous book, All Fun And Games Until Someone Loses An Eye, somewhat disappointing; it seemed almost as if someone replaced the wickedly dark satirist who wrote Quite Ugly One Morning and A Big Boy Did It And Ran Away (whom some have called the Bill Hicks of Scottish crime fiction) with a committee of Hollywood script-doctoring hacks; virtually all the bite was gone (with the exception of a few token bampots and numpties and a dash of rote Old Firm sectarianism), and replaced with a schmaltzy wish-fulfilment story. This was centre-of-goodness plotting at its most formulaic and uninspired. As such, I only picked this book up when it was half-price from Amazon and I needed to pad out an order.

I am pleased to report, then, that A Tale Etched In Blood And Hard Black Pencil is a return to form. The plot involves various people who went to school in the early 1980s in (you guessed it) greater Glasgow, and their lives in the present day; more specifically, one of them has apparently been murdered, and two others look like the suspects. The characters' school days, in all their petty viciousness, brutality and moments of levity, are fleshed out quite realistically (one can empathise with the children in their schoolyard conflicts as much as with their grown-up selves), and the way the characters grow, gaining perspective and no small amount of regret. Needless to say, dark secrets are revealed and some people turn out to not be what they initially seem, in various ways. And Brookmyre, perhaps acknowledging the shortcomings of his previous book, sets up an obvious wish-fulfilment plot line, and then proceeds to swerve well wide of it.

, of which I found a copy (in English) recently. This novel is probably best known for having been adapted into a film (one of the best-known Icelandic films of recent years in the English-speaking world, partly undoubtedly due to Damon Albarn having done part of the score).

101 Reykjavík is the story of Hlynur, a thirtysomething slacker who lives with his exceedingly indulgent mother in the central postal district the title is taken from. However, beyond that, the book and the film are quite different; the film is much lighter, fluffier, more stylised and cooler, almost like a tourist ad for hip young people, whereas the book goes into darker territory; where the movie is Human Traffic, the book is Trainspotting.

The movie Hlynur is a lovable hipster doofus, a comical flightless bird, an adorably bumbling geek-chic Everyman plucked out of a Jarvis Cocker impersonation contest at Kaffibarinn. The book's Hlynur, however, is a much darker figure; a pathetic, sociopathic nihilist, destructive and self-destructive. In both, he ends up possibly fathering his mother's lesbian lover Lolla's child, and angsting considerably about it and his relationship to the lover and the child. In the book, he does a number of un-cuddly things like sexually molesting the mother of a girl he picked up, stealing one of his sister's birth control pills (and causing her to fall pregnant), and deliberately attempting to contract AIDS in a fit of self-pity, in between the numerous somewhat unflattering observations in his narration. The narrative voice of the book goes into long, poetic monologues (perhaps this is typical of Icelandic literature?) expounding jaded views of the human condition and contemporary Icelandic society, and (with one exception) betraying no empathy with any person other than the narrator. The Hlynur in the book is not a likeable or sympathetic character.

The book also doesn't have the redemptory ending of the movie; the tragic narrator of the novel does not magically find his feet, experience personal growth and come out a better person like the once cynical hero of an American romantic comedy, but continues much as he has ever done. A number of other elements (Hlynur's Hungarian penpal, a trip to Amsterdam and Paris, and the whacked-out barfly mystic who follows the teachings of white limousine-riding guru "Waldorf") were inevitably cut along the way from book to movie. And, in case you were wondering, making Lolla Spanish (so that she could be played by Victoria Abril) was the filmmaker's invention.

The book is interesting, though those who have been to Reykjavík, or are familiar with Icelandic society, would probably get the most out of it. (If a trip to Iceland is out of the question, at least read The Xenophobe's Guide to the Icelanders 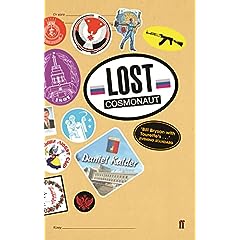 Costumed crimefighters seem to be the big thing in Britain these days: firstly there was the one in Tunbridge Wells, then Angle Grinder Man came along to defend London motorists from having to take responsibility, and now two chaps dressed as Batman and Robin are protecting the residents of Reading from muggers and football streakers.