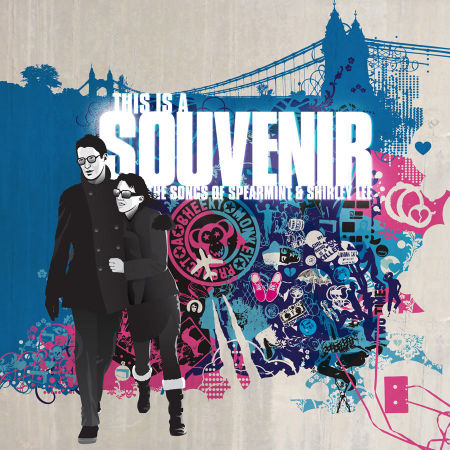 This week, I went to see Spearmint at the Luminaire. They were excellent; incredibly tight and energetic, with lots of handclaps, harmonies and dancing around the stage. And their new material is quite impressive (particularly Psycho Magnet, which sounds like what Funny Little Frog would have been had it been recorded by early-1990s Pulp rather than Belle & Sebastian).

Anyway, a few choice video fragments from the gig:

UK indie band Spearmint have a new fans-only acoustic CD. Titled "The Boy And The Girl That Got Away", it features nine songs written especially for an acoustic tour earlier this year, and may be found at Spearmint's label's website:

This album is strictly limited and will not be available in high street shops or from other websites. Featured tracks are:

London-based indiepop band Spearmint are offering a new downloadable single. The mail says it's an MP3 (and not some kind of DRM-crippled Windows Media file or what have you), and will set you back one quid, including artwork. (That includes VAT, which presumably they'll deduct if you're not in the EU.) Or, for £2.50, you can get it and singles by two other bands on the hitBACK label (The Free French and Host).

The time is nigh upon us for the obligatory "top 10 albums of the year" lists (Graham already has his, for example). I'm not going to post my best CDs of 2002 just yet (for one, I'm still not through with all of this year's releases, and am still awaiting a particular consignment from Twee Kitten); however, I am going to do something related, that is, look at the lists for 2001 I wrote up a year ago, here and here, and see how they hold up a year later; which of my picks of the year have stood the test of time, which have fallen by the wayside, and which discs have emerged subsequently as favourites of that particular year. So please allow me this exercise in self-indulgent omphaloskepsis.

(Of the honourable mentions, I've listened to the Angels of the Universe soundtrack and the Sealifepark album since. The Zero 7 album sort of got shelved, as I really only liked one track of it. Jan Jelinek's Loop Finding Jazz Records suffered a similar fate, having failed to hold my interest with its ultimately less than satisfying combination of deep-house-like rhythms and chords and Max/MSP laptop glitchery; and TISM's De Rigeurmortis lasted about one and a half listens. Oh, and as for the Field Mice best-of, that's still one of my favourites and is usually not far from the CD player.)

And now for the unsung favourites; the CDs that didn't make the list, but ended up redeeming themselves after further listening: