In the wake of Starbucks' Napoleonically epic retreat from Australia, The (Melbourne) Age has a piece on Melbourne's indomitable coffee culture, which apparently goes back long before mass Italian immigration in the 1950s and the resulting espresso boom:

In his entries on coffee and coffee palaces in the Encyclopedia of Melbourne, [historian Andrew Brown-May] retells the beginnings of Melbourne's coffee culture, traced back to the street stalls of the 1850s that offered caffeine hits to rushed city workers, then re-emerging as continental coffee houses in the interwar years of the 1920s and 1930s.

By the 1950s, the influx of Italian migrants had helped redefine coffee for Melbourne once again, serving it up in espresso cups instead of percolators. Yet two of the key proponents of the espresso bar were father and son team Harry and Peter Bancroft, Anglo-Australians who in 1953 secured the rights to manufacture Gaggia coffee machines and set up a cafe in St Kilda.

I didn't know that they actually made Gaggia machines in Australia. You learn something new every day.

The article then points out that narratives framing the vanquishment of Starbucks in simple plucky-Aussies-vs.-Yankee-imperialists terms aren't entirely accurate; rather, it's a case of Starbucks sowing the seeds of their own defeat by not acknowledging that the café-culture experience they were trading on is essentially one of differentiation from the mainstream, and that a Starbucks in every suburban shopping mall destroyed a lot of the cachet behind the brand; it's the "nobody goes there anymore; it's too crowded" phenomenon that poisons cultural trends (from musical genres to fashions—think the trucker hat, the "Hoxton fin" haircut, or anything labelled "indie" in the UK) as soon as they become successful.

Writing in The Christian Science Monitor, Temple University historian Bryant Smith argues that when Starbucks began, it offered Americans an entree into a status-filled world with is own language of ventis, grandes, Tazo teas and special-blend coffees, all stamped with the company's distinctive green logo.

But by becoming too common — Starbucks first opened in Australia in 2000 and expanded to 84 stores in eight years — the company "violated the economic principles of cultural scarcity", Smith says.

One cause, of course, doesn't exclude the others. Starbucks never became the all-conquering juggernaut in Australia it became elsewhere, due to the sophisticated local coffee culture, and while its recent misfortune has been global, it would have hit particularly hard in a relatively inhospitable market such as Australia.

Multinational coffee chain Starbucks have announced that they will close 61 our of their 85 Australian outlets. That's just under 72%.

What surprises me is that they had 85 outlets in Australia in the first place. Thanks to large-scale Italian immigration in the 1950s and 1960s, Australia has very high standards for what constitutes a good cup of coffee. The inner cities of Australia are full of cafés with espresso machines and baristas who know how to use them well, to the point where cafés in the UK advertise their staff's Australian training, and the locals' expectations of coffee is at a level well above Starbucks' ability to compete, even with their resources.

Who could possibly have patronised all those Starbucks outlets? Surely there wouldn't have been enough risk-averse American businessmen passing through to justify 85 of them.

Corporate coffee chain Starbucks isn't doing too well; they've had to close 600 stores in the US, in less than favourable circumstances. (Favourable circumstances for Starbucks being closing the 2nd and 3rd stores they opened on a block and ran at a loss after the last independent café nearby went out of business.) Unsurprisingly, some coffee fans are over the moon:

The company that began as innovative is now known for consistency and convenience, [another commentator] said. "To me, that's a huge step down," she said. "You've built your franchise on people who are coming in because they know exactly what they want."

Starbucks still has their defenders, mostly on the grounds that they're convenient and consistent. 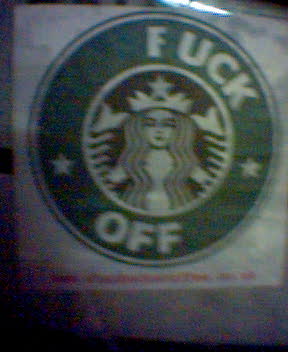 In San Francisco, culture-jammers have closed down at least eight Starbucks shops, or at least made it look that way. The unnamed freedom fighters/economic terrorists poured glue over the shops' windows and stuck up "FOR LEASE" signs, as well as faked press releases on Starbucks letterheads announcing that the company has had a crisis of conscience and decided to go out of business:

"The global economy requires a relentless substitution of quantity over quality and shareholder value over human values," it read. "At our current market level, Starbucks cannot in good conscience guarantee all of our beans meet both our rigorous quality standards as well as our commitment to social responsibility. We are moving over and making room for local coffee bars."

Police are in hot pursuit, and the good citizens of McWorld can rest assured that the perpetrators of his heinous crime will be brought to justice. (via jwz)