Someone has invented a must-have accessory for the radical urban itinerant, a means of getting free accommodation whilst striking a blow against car culture: a tent shaped like a car cover, which turns any parking space into a campsite: 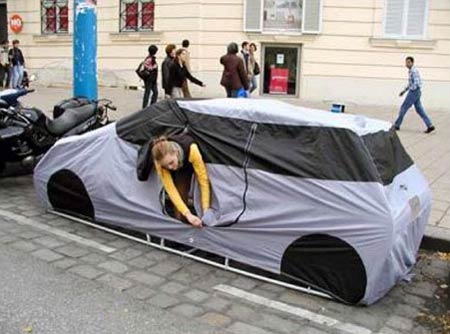 BBC News Magazine has a piece on subversions of office jargon:

Enough with all this blue sky thinking in the workplace. Not just because the phrase is yet another example of meaningless office twaddle. But because it is time for some red sky thinking, the signal, in these darkening autumn days, that it is nearly time to go home.

A polidiot is someone promoted beyond their abilities thanks to their political skills. How to spot them? Well, they will be the ones testiculating - waving their arms around while talking nonsense. Often supported by a backing singer, that familiar person in a meeting who doesn't contribute their own ideas but just nods along with the boss.

But spare a thought for Valerie; hard at work, but baffled. At her office, the mission is to herd the dinosaurs to the right end of the cricket green. What does it mean? She has no idea.

And then there are terms like "raise the bar on this" (leave it for the pub), and "expectation management" (or what the boss wants to hear).