There is an article in The Quietus (written by Pipettes svengali turned avant-garde impresario Bobby Barry, no less) about the recent revival of analogue modular synthesizers. You know; the room-sized hulking behemoths, last seen on stage some time around the mid-1970s being operated by becaped prog-rock virtuosos and soon to be displaced by Minimoogs, then the wave of compact non-modular keyboards from Japan, and finally laptops. Well, now there is a new wave of modular synthesizers. Unlike the modulars of old, the components are standardised (based around a standard named Eurorack), strictly analogue (at least in how they interface with each other), and selling like hotcakes:

Carlo Krug from Schneider’s Buero reckons that the last few years have seen a three- or four-fold increase in the amount of manufacturers bringing out Eurorack modules. One poster on the Muff Wiggler forum, where various correspondents have been trying to put together a timeline of Eurorack history, suggested that the number has risen so sharply in recent years that, “in 2045 the curve will go completely vertical. The modules will start making themselves.”

Other than being more compact, the Eurorack wave is not your grandfather's Moog in other ways. Advancements in technology have made it easier to develop more complicated modules, meaning that those not wedded to a Moogian subtractive-synthesis purism are free to go wild with all kinds of hitherto unimaginable modules:

Even back in the 60s, there was already a division opening up between the so-called ‘East Coast’ approach to synthesis, epitomised by Moog, and the ‘West Coast’ school of inventors like Donald Buchla and Serge Tcherepnin. The former tends to be based on ‘subtractive synthesis’, where ... (t)hings tend to have one function and one output and it’s largely eared towards being played with a keyboard. Buchla and Serge did things differently. They made synths controlled by touch pads and joysticks with weird and wonderful modules bearing named like ‘Multiple Arbitrary Function Generator’ or ‘Source Of Uncertainty’. Such machines have always been crazy expensive but, according to Lynch, new manufacturers like Make Noise and Wiard are “making the Buchla end of things more available now.”

In fact, there's probably no reason why the modules would have to remain analogue internally; one could conceivably fit in, say, an Arduino-based sequencer, or if one was sufficiently perverted, a Raspberry Pi running a Pd patch or something.

The new modules (and the synths one builds from them) also cost less than their distant predecessors, with the falling cost of electronics, at least in monetary terms, though they're still not cheap; simple modules might cost around £60, with more complicated ones going for hundreds, and the cost has a way of building up as one buys enough to build a viable synthesizer. A more pressing constraint, however, may be space (especially in cities like London, where the Invisible Hand Of The Free Market is aggressively adjusting the amount of space available to ordinary people ever downwards, and where the London Modular shop is reportedly doing a roaring trade). A modular synthesizer, by its nature, takes up space (physical space, the old-fashioned kind; measured in square metres, not megabytes).

In the Berlin of recent years, with its cheap, spacious squats in the hollowed-out ex-Communist east and abundant low-cost slack, one could conceive of taking up a hobby of playing with modular synthesizers, and keeping at it long enough to make some minimal techno which looks as impressive as it sounds. In white-hot oligarchical London, one does wonder who is buying all these Eurorack modules. I wonder if their profligate bulk does not make themselves a status symbol in and of themselves, making them attractive to a certain type of young finance alpha-predator seeking to demonstrate to his Tinder conquests that (a) despite working at Goldman, he is still a bohemian creative spirit at heart, and, more subtly, (b) that working at Goldman enables him to afford the living space in which all those blinkenlights can be set up, tastefully overlooking the city skyline. Or perhaps an older target market; with middle-aged executive types who spent their youths necking Es at raves buying them, in the way that one might have once bought that expensive, beautiful-sounding electric guitar one was fated to never have the time to actually learn to play. (It has been commented that, these days, the modular synthesizer is the Harley-Davidson of electronic music, more showpiece than workhorse.) One or two may end up in the foyers of creative marketing agencies, or perhaps at some point Foxtons or someone similar will buy a job lot and array them in their offices, as part of a campaign about how, you know, edgy and creative and hip London is. In any case, I wonder what proportion of the modular synthesizers sold in London will actually end up being played for any non-trivial amount of time.

In a play for the wallets of synth fetishists and authenticity-hungry hipsters, Korg have released a new edition of their MS-20 analogue synth. The MS-20 Mini is slightly smaller, has a USB MIDI interface and uses 3.5mm plugs for its patch leads rather than 6.5mm ones, but otherwise is identical to the 1978 MS-20, with the exception of a slightly cleaner voltage-controlled amplifier. It follows a number of software recreations (including an iPad app named iMS-20 and various softsynth plug-ins for use in music software).

There was a time slightly after the dinosaurs that I owned a small wall of KORG. There was two MS20′s, an MS50, a SQ10 and a billion of those short patch cables. And you know, it was pretty grand for 1980 something. For 2013, it’s… well… gee what a nice watch, does it tell the time?

But here we go again with a reissue of Old and Safe for the New Conservatives. Already been asked if I am going to buy a new midget MS20. I bought a MiniNova instead – maybe I made the wrong choice. Let’s be scientific about this:

Patch Management
MiniNova: there’s four banks of 256 patches which can be sorted into categories and saved back to a patch librarian over a USB connection.
KORG MS20: photocopy pages from the manual and draw the approximate positions of the knobs with a pencil.
Advantage: KORG for being legendary and analogue.

I keep reading the articles and hearing the talk and wondering if people use this stuff for making music. Or does it go next to the “Christmas Tree”? You know, that elaborate, expensive modular system that people build to look fantastic but sounds like a Roland preset that goes bwooooouuuw?

An interesting article on the genesis of the Roland TR-808, and how Roland's famous line of drum machines owes its existence to an American musician and circuit-bending pioneer named Don Lewis:

Raised with a rich gospel tradition in Dayton, he brought his myriad musical talents to San Francisco in the ‘60s, where he was a staple in nightclubs. His one-man-band became known for its wild array of electronic instrumentation, which was still a novelty in those days — a small truckload of synthesizers and early rhythm boxes accompanied Don’s richly-vocoded tenor to make a sound no one had heard but everyone liked.

Don had been hired by the Hammond organ company to demo its products on the show floor. He was using an Ace Tone rhythm box (which was distributed by Hammond at the time) as his percussion section. "I had modified my Ace Tone to death, changed all the rhythms because none of them fit my style of playing. I also wired it through the expression pedal of the Hammond, so I could get [percussion] accents, which no one was doing then. After the show this man from Japan came up and the first thing out of his mouth was ‘that looks like my rhythm unit but it doesn’t sound like my rhythm unit! How did you do that?’" It was Ikutaro Kakehashi, the president of Ace Tone.

Kakehashi went on to found Roland Corporation, capitalising on Lewis' suggestion for a rhythm box with modifiable rhythms (or, what later became known as a drum machine), and hiring Lewis as an engineer, to work on projects including the CR-68 and, eventually, the TR-808.

On a visit to Roland’s Tokyo offices in the late ‘70s, Don was working with chief engineer Tadao Kikumoto. "That day he had a bread board of an 808 and was showing me what was going on inside — he sort of bumped up against the breadboard and spilled some tea in there and all of a sudden he turned it on and got this pssh sound — it took them months to figure out how to reproduce it, but that ended up being the crash cymbal in the 808. There was nothing else like it. Nobody could touch it."

The article also describes Lewis' homemade Live Electronic Orchestra, the complex of ancient synthesizers and other circuits which Lewis played live back in the 1960s, and which has been restored for a special performance at the NAMM music trade fair:

It’s a one-off work of art, a kind of who’s who of vintage synthesizers networked to one another through connection standards the industry has long forgotten but Don is still fluent in. A series of hand-built buffer boards and timing modules allow an Arp Pro Soloist to talk to a Promars Computronic and a Roland Jupiter-4. The Hammond expression pedal can control a variety of parameters for any of the sounds coming through the Boss KM-6A mixer, whose channels Don built a remote control panel for right into the body of the three-stage organ. It’s basically a 1977 copy of Ableton Live that weighs two tons, doesn’t have a EULA, and does a heart-melting rendition of "Amazing Grace."

In Japan, as a law banning electronic equipment older than a few years takes effect, people are taking to the streets to fight for their right to own vintage synthesisers and such: 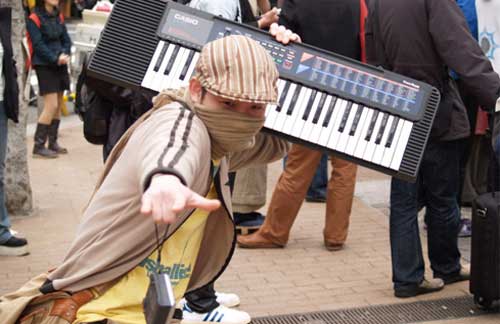 Museum of Soviet synthesizers; lots of info about various analogue synthesizers and drum machines (some conventional-looking and some weird) built in the old USSR; has photos, details and some sound samples.