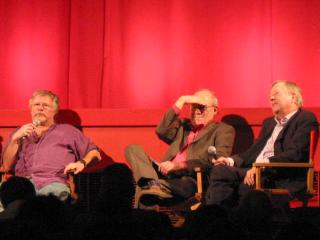 Following on from the fact about John Garden, a few more Goodies-related items. Firstly, the the second DVD compilation comes out in the UK in two weeks (there's an official launch in London's Prince Charles Cinema on the 12th), with Australia following on 3 March, and will include, among others, Radio Goodies and Sarth Efriker. Apparently a third DVD set is also in the works, on the strength of sales of the first set, so if your favourite episode isn't in the first two sets, it may well be there.

Secondly, Tim, Graeme and Bill are doing a Goodies tour of Australia, playing gigs on the East Coast (Sydney, Melbourne, Brisbane and Canberra) in early March. Australia seems to be the world leader in Goodies fandom, being more fond of the series than Britain (case in point: you can get Goodies T-shirts on Brunswick St., though you won't find them amongst the Michael Caine/Vespa/Atari/random-sexual-innuendo T-shirts all over Camden and Carnaby St.). I'm hoping, though, that they do some London shows at some stage, if only for the city's population of Australian expats.

Something I didn't know until a few days ago: the keyboard player from the Scissor Sisters is apparently the son of Graeme Garden from The Goodies. (via trayce, who found it on the ILX forums)

Real life riffs off The Goodies: an Oxfam shop has asked donors to not give them any Max Bygraves records, because they've already got too many of them. The same goes for Val Doonican records.

"We love having vinyl of Donovan, Bob Dylan, The Beatles, The Rolling Stones, Elvis Presley," she said. "Recently we sold an Elvis single for £79 so it's a good market for us.

After reading the comments about BeTh's boat-naming dilemma, my mind turned to the question of why there wasn't a DVD of cult 1970s comedy series The Goodies. The theories I've heard about this included (a) that it's considered too racist/sexist/politically incorrect for this enlightened age, (b) that Tim/Graeme/Bill would rather the public forgot about their youthful indiscretions, or that (c) no archival footage of the series survives, with decaying VHS tapes recorded off the telly being the only remaining record of this series.

So I decided to do a Google search for "the goodies" dvd, and lo and behold, it appears that there is now a Goodies DVD, with 8 episodes. And it's region 0 too, for those still trapped under the jackboot of the MPAA.

(It doesn't seem to have the pirate radio episode, alas, but you can't have everything. Maybe if enough people buy this one, they'll release more episodes.)