"He thought he was exaggerating. He didn't foresee that a very practical country like China might actually use them for real," said one critic. 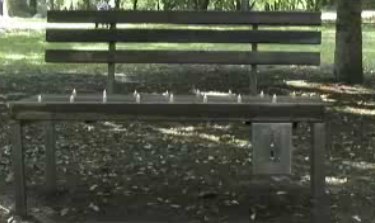 "Cyborg researcher" Steve Mann has produced a prototype user-pays chair. The chair is fitted with spikes which retract when a seating licence is purchased by swiping a credit card; a buzzer sounds when the licence is about to expire. A CCTV camera is used to prevent the smuggling in of licence-circumvention devices such as boards and cushions. (Apparently the seat was exhibited in San Francisco in 2001, but bOING bOING only mentioned it now.)